(Clearwisdom.net) Australian MP Andrew Bartlett recently joined the Coalition to Investigate the Persecution of Falun Gong (CIPFG). He stated in an interview that the Australian government is obliged to take more actions in the face of the allegations of the CCP’s organ harvesting from living Falun Gong practitioners, and make sure the public learns all facts. 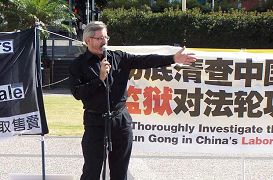 As early as the first revelation that the CCP was harvesting organs from living Falun Gong practitioners for profit, Senator Andrew Bartlett made a speech at a rally held in Queensland to support quitting the CCP and exposing the crimes of live organ harvesting. He said, "Everyone today passing by the rally, should ask himself/herself: what can I do to stop the persecution? We cannot remain silent over the trampling upon human rights for commercial and economic interests." When two Canadian independent investigators released their report, the Senator felt he had the responsibility to pay more attention to such serious violations of human rights. Not long ago, he joined the CIPFG.

Australian government must take specific actions, and make sure that the public knows all facts

Andrew Bartlett expressed that the Canadian independent investigative report has drawn great attention. It concludes that the allegations of the CCP’s organ harvesting from living Falun Gong practitioners are true. Therefore, Australia is obliged to show immediate concern over China, and governments in other countries also want to learn all facts.

He believes that the Australian government’s record shows that the Chinese government (CCP) has seriously violated human rights. China has attempted to cover up the facts on many issues, but it fails to do so.

For the sake of the country and the region, the Australian people should pay attention to the human rights violations, and take the lead. Especially, as Australia and China have constantly increased trade interactions, whit increasing opportunities for the Chinese technical workers to work in Australia, and the coming Olympic Games to be held in Beijing, all this makes the Australian government feel obliged to take more action. Especially with respect to the allegations of live organ harvesting, the Australian government should take special actions to make sure that the public learns all facts.

Senator Bartlett stated that the Australian government has not given priority to human rights on many issues, and has not fulfilled its promise on human rights. It is unacceptable. He believes that it will bring harm to the interest of Australia, as a democratic country, neither helpful for the Australia’s prosperous development in future, because it is against our human nature. He firmly believes that all social strata should be committed to basic human rights.

He said that he will try his best to get together with others, to utilize political democratic procedures, and to increase public opinion to urge the Australian government to pay more attention to human rights.