Melbourne, Australia: Practitioners March, Call on the World's People to Recognize the CCP’s Evil Nature and Stop the Persecution (Photos) 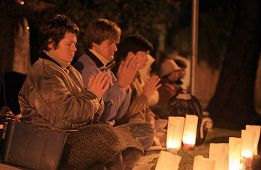 On the evening of July 20, practitioners held a candlelight vigil in front of the Chinese Consulate

On July 20, 2006, the persecution of Falun Gong entered its eighth year. In the persecution, Falun Gong practitioners in China have suffered under the CCP's brutal official policies: "Ruin their reputation, bankrupt them financially, destroy them physically", "those beaten to death are counted as suicide", "do not check the identity but cremate directly". In March of this year, the barbaric atrocity of harvesting organs from living Falun Gong practitioners for profit and cremating their remains was exposed, which further demonstrates the CCP’s evil nature.

The march started from Victoria Park near the central train station. With the compassionate sounds of "Pudu" and "Jishi" playing in the background, police cleared the way for the procession to march slowly along several main streets, catching the attention of passers-by and tourists.

The procession was composed of three sections: the introduction of Falun Dafa and its wide spread around the world, commemoration of practitioners tortured to death, and an anti-torture exhibition and exposure of the organ harvesting. Some practitioners explained the facts and distributed flyers. People were shocked when they learned the truth.

The march was very peaceful. Even the police were moved by the solemn atmosphere.

At the destination of the march, Federation Square, the practitioners set up anti-torture poster boards and a reenactment of the live organ harvesting.

Falun Gong spokesperson Ms. Catty said that practitioners call on the Australian government and people to recognize the CCP’s true nature, spread the facts, and stop the persecution.

David Matas, international human rights lawyer, and David Kilgour, former Secretary of State (Asia-Pacific) for Canada formed an independent investigation team and released their report to the media on July 6, 2006. Mr. Matas said that this was a new form of evil never before seen on this planet.

Practitioners called on governments, NGOs, media, and individuals to join and support the Coalition to Investigate the Persecution of Falun Gong (CIPFG). Everyone should urge the CCP to allow CIPFG to enter China and conduct independent investigations in the labor camps, prisons, brainwashing centers, and hospitals involved.

Many local residents and tourists learned the facts about the CCP’s persecution of Falun Gong and signed a petition. Some took photos and expressed their support for the efforts to end the persecution.

A Chinese student studying in Britain said, "I am surprised that so many people attend and support this activity. Jiang Zemin should not persecute Falun Gong."

Jane is a local middle-aged woman. She was shopping in Chinatown with three Chinese students from Hangzhou, Zhejiang Province, China. She said, "The Australian government should know about this. People should stand up to speak out and let others know what happened. Live organ removal cannot be accepted in any country. It shows ignorance of human rights."

A young man from Zhejiang said, "I was very glad to see today’s parade. Much news is blocked in China. I heard of some of the news on the Internet. Many people dislike the CCP but cannot speak out."

On July 20, practitioners held a candlelight vigil in front of the Chinese Consulate in Melbourne to protest the seven-year-long brutal persecution of Falun Gong and to commemorate those practitioners tortured to death by the CCP.