Paris, France: Many People Join Practitioners to Condemn the Organ Harvest and Protest the Persecution (Photos)

On July 15th and 16th, 2006, Falun Gong practitioners gathered at Human Rights Square and Montparnasse Station in Paris to publicly expose the persecution of Falun Gong in China. July 20, 2006, marks seven years since the CCP banned Falun Gong and began its official policy of persecution.

When the CCP's crime of harvesting the organs from living Falun Gong practitioners was exposed, all circles were shocked. This cruel crime is inhuman, and is "a form of evil we have yet to see on this planet". It fits exactly with the CCP's official policy, that is, "ruin (practitioners') reputations, bankrupt (practitioners) financially, and destroy practitioners physically." Learning about these atrocities, the French people express shock and indignation, hoping that world governments will take action to stop the persecution.

Harvesting organs from living persons is a crime 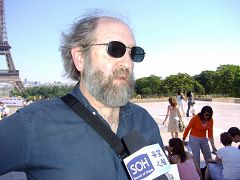 Dr. Roland Higgins in an interview

Dr. Roland L. Higgins teaches Chinese history and international studies at Keene State College in the USA. He has visited China five times. He visited the Paris Human Rights Square and was shocked when he saw the practitioners' demonstration simulating the organ-harvesting now underway in China. He said that he understood Falun Gong, and had signed to support Mr. Li Hongzhi to win the Nobel Peace Prize. He thinks Falun Gong brings peace into life and many people in the world cultivate. However, the Communist Party takes religions, cultures and beliefs as threats.

Regarding to the accusation of harvesting the organs from living persons and trading for profits, Dr. Roland L. Higgins said: This kind of thing has happened for a long time. I think harvesting the organs from living persons is a very terrible crime. Independent investigators and Amnesty International has investigated and found that many Falun Gong practitioners are imprisoned in concentration camps, labor camps and jails. They were persecuted seriously. We need international pressure, such as the UN, an international tribunal, or some international judicatory organizations and so on, to take action as soon as possible to stop this matter.

World governments must take action to stop this persecution

When understanding the matter of harvesting the organs from living persons happening in China, a tourist from Moscow expressed: "I hope this problem (organ-harvesting from living persons) can be solved sooner. The Communist Party is very stupid and other countries' governments must take actions to stop this persecution."

Mr. Samuel from France said: "I know Falun Gong has been persecuted in China, but I didn't know the situation of the persecution has reached such an acute degree. The organ harvests from living persons in concentration camps is astounding. I couldn't speak seeing these pictures. You don't see those in any newspapers. What you've done is a good start."

Ms. Gabrielle from France said: "It is astonishing that the concentration camps exist in China and that the organ harvests take place. World governments should use their ways to point out and take part to interfere with this matter. The information of the persecution against Falun Gong is very important, and I stand with them.

Ms. Dominique Leroland from France said: "I knew there is persecution existing in China, but I didn't know it's to this extent. I can hardly believe it. [...] If there's any evidence of the concentration camps, the 2008 Olympics shouldn't be held in China. Because the Olympics' spirit is to respect human rights, we should follow this tenet, but not just focus on the economic profit because human life is more important than money."

Mr. Dupuis from France said: "The existence of the concentration camps in China is too astonishing to speak about. The concentration camps are systematic killers. This is very terrible for the children. What kind of world will they grow up in? This makes me want to cry. Although other world governments know about this persecution, they are worried about their business with China, so they don't respect China human rights at all. This makes me feel sad. This persecution needs to be known by more people; otherwise they (CCP) will be more savage."

Mr. Ze from Paris said: "The existence of labor camps in China is very bad. This shouldn't exist. The organ-harvesting from living persons is too terrible, and I'm against it."