Falun Dafa practitioner Mr. Gao Jidong lived in Changchun City, Jilin Province. He was held in the Xinglongshan brainwashing center in 2002, where he was tortured until he was as thin as a skeleton. He had to leave home in that physical condition to avoid being illegally arrested at home again. After living four years of a hard life, he died on July 15, 2006. 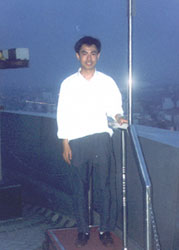 Mr. Gao Jidong, 33, was an employee of the Changchun City Foreign Tax Bureau. He could speak four languages, and lived in the Family Housing of the Changchun Automobile Factory. He firmly held his faith in Falun Dafa. He had been arrested twice, in March 2001, and July 2002, and was detained in the Xinglongshan brainwashing center.

Mr. Gao Jidong was among the first group of Falun Dafa practitioners to be subjected to forced brainwashing. He went on a protest hunger strike for several days before being sent to the brainwashing center, and continued his protest with a hunger strike five or six days. The guards started to force-feed him. People heard Mr. Gao's painful screaming during the brutal force-feedings, accompanied with vomiting and the guards' cursing. He started vomiting blood after 4-5 days of force-feedings (which occurred twice a day). The guards stopped force-feeding Mr. Gao in fear that he would die.

Gao Jidong was emaciated. The Chinese Communist Party officials in the brainwashing center deceived his father into signing an agreement on further treatment via intravenous injection. Soon Mr. Gao had reached a critical condition, and the doctors wanted him to be hospitalized due to mineral imbalance and heart and lung problems. Under such a severe situation Gao Jidong was released from the brainwashing center.

Mr. Gao was forced to live out of town for four years to avoid further illegal arrest. Due to the brutal force-feeding and inhuman tortures received in the brainwashing center, he had been living under terror. He was so traumatized, that his mental and physical condition never recovered. In June 2006, Mr. Gao's apartment building was under investigation for unauthorized renters. He was nervous again, and started moving from place to place, causing his physical condition to worsen. Gao Jidong died on the morning of July 15, 2006.

“Singapore: Practitioners Call on the Government to Drop the Charges Against Them”