New York: Practitioners Call on the Singapore Authorities Not to Appease the CCP and Do Harm to the Country and its People (Photo) 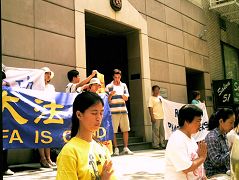 Ms. Yi Rong, representing the Eastern U.S. Falun Dafa Association, delivered an open letter to the Singapore Consulate in New York and Singapore's Permanent Delegation Stationed in the United Nations. The letter states that since the revelation of the CCP's live organ harvesting, more and more people and organizations have started paying attention to and condemning the atrocity. But the Singapore government is assisting the CCP in suppressing Falun Gong practitioners. The Eastern U.S. Falun Dafa Association calls on the Singapore government to stand with the righteous, and immediately drop the charges against Falun Gong practitioners.

On July 10, 2006, nine Falun Gong practitioners in Singapore received subpoenas from the police, asking them to appear in court on July 14. They were charged with "Assembly without permit." The reason was that the abovementioned practitioners distributed flyers exposing the CCP's persecution of Falun Gong and supporting withdrawals from the CCP and its affiliated organizations on October 22-23 last year in the downtown area.

On the morning of July 12, 2006, Ms. Huang Chay Hua went alone to the outside of the Chinese Embassy to do the exercises as usual, while carrying a small banner on her back. Soon, more than a dozen plainclothes police came and took her to the Tanglin Police Station. The police had her investigated under the charge of "malicious harassment." The reason was that the content of the banner was protesting Li Lanqing persecuting Falun Gong. Li Lanqing was the head of 610 Office, an organization of the CCP dedicated to the persecution of Falun Gong.

Mr. Xu from Singapore also came to the activity site to support it. He said, "Singapore is a democratic country only in name. It follows the CCP closely, and other than due to the pressure from the CCP, it also has something to do with its own bad elements. Taking me as an example. I went to work in Singapore from Mainland China in 1998 and started practicing Falun Gong at the end of 1999. When I applied for permanent residency (PR) status, Singapore officials directly asked me if I wanted Falun Gong or PR. I refused to give up Falun Gong. As a result, I could not get PR in the past eight years. In 2005, I and another person jointly applied to register a company, but our application was also rejected. Later, I applied for a work permit, but I was still rejected. At last, I had to go to another country. But during my contacts with Singapore government department staff, I found they are kind, but helpless under the autocratic rule. "