Melbourne: Practitioners Call on Australia to Pressure CCP to Allow Investigation and End the Persecution (Photos)

After the release of investigation report by an independent Canadian Investigation team on July 6, 2006, media in Australia covered the report widely. On the morning of July 14, 2006, Falun Gong practitioners in Australia held a press conference in front of the Chinese Consulate in Melbourne to expose the Chinese Communist Party (CCP)'s atrocities of organ removal from living Falun Gong practitioners. They called on all levels of government, non-governmental organizations and the public to exert pressure on the CCP, to request international independent investigation, and to urge the CCP to immediately stop the unlawful imprisonment and persecution of Falun Gong practitioners in labor camps and prisons. 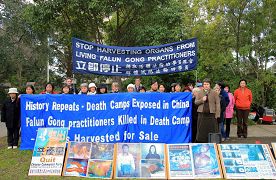 On the evening of July 14, practitioners hold candlelight vigil in downtown square

Practitioners held banners and posters to announce the content and conclusion of the investigation report, as well as the response to the report in the international community and Australia. Currently, dozens of VIPs from all circles in Australia have joined the Coalition to Investigate the Persecution of Falun Gong (CIPFG).

A practitioner said that the independent investigation verified the CCP's crimes of live organ removal.

She said that the CCP must be held responsible for the atrocities. Western countries promised not to let the genocide that Nazis committed against the Jews to occur again. But the atrocities of live organ removal are occurring in China. As human beings, we cannot keep a blind eye.

The practitioners called on all levels of government, non-government organizations and individuals to join the CIPFG and help stop the CCP's persecution of Falun Gong.

Besides the information desk on a downtown square every Saturday, practitioners started last week to hold poster displays and anti-torture exhibitions from 4 to 8 p.m. every day during rush hour. They also distributed truth-clarification flyers and collected signatures. Many of the public thought the live organ removal was inconceivable. The practitioners explained the CCP's crimes of causing 80 millions deaths in the 55 years since it took power. People were shocked and signed the petition calling for an end to the persecution.