(Clearwisdom.net) On June 7, 2006, Judge Liu Lin, in Licang District, Qingdao City, Shandong Province, sentenced Falun Dafa practitioners Min Huirong and Sun Hong, husband and wife, to five years in prison. The sentence was groundless even under the Chinese Communist Party's (CCP) unlawful codes, and was based on fabrications. 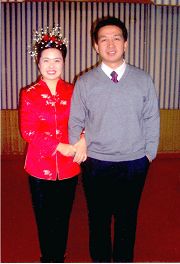 Sun Hong is an acupuncture doctor in the Chinese Medicine Division of Qingdao City Hospital. Min Huirong was originally a teacher in the Qingdao School for the Blind. They were previously sentenced to three years of forced labor starting in December 1999 and September 2000, respectively, because they persisted in their belief in Falun Gong. Mr. Min was also fired by the school where he had worked. Both were illegally arrested again on September 21, 2005, within ten months of their recent marriage.

The 610 Office and the police department in Qingdao City tortured the couple physically and psychologically continuously for four months to try to force them to "confess." Their family members hired local lawyers to help them, but the 610 Office directed the police not to let the lawyers meet with them. The justice department in Qingdao City also pressured the lawyers to stop helping the couple. Their family members could not help them locally, but went to look for lawyers in other cities to help.

On April 4, 2006, the 610 Office organized the executive officials, prosecutors, and judges to try Min Huirong and Sun Hong in the Licang District Court. The participants included judge Liu Lin, court recorder Liu Tao, and prosecutor Wang Chengxin. Because the fabricated "evidence" was shown to be invalid by the two defendants and their lawyer, the first trial ended abruptly. Afterwards, the prosecutor interrogated the couple many times in order to fill in the blanks of the so-called evidence.

The second trial was originally scheduled for 9:30 a.m. on July 7, 2006, at the Licang District Court. Due to exposure of this case by the Minghui/Clearwisdom website, the court suddenly switched the location of the trial to the Qingdao Dashan Detention Center and did not notify the family members until after 9:00 p.m. the night before the trial.

On the morning of July 7, 2006, there were only five to six audience members in the so-called court in Qingdao Dashan Detention Center. They were Mr. Min and Ms. Sun’s relatives. Judge Liu Lin read the "verdict" and illegally sentenced Min and Sun to five years in prison. The adopted evidence was that which had been proven invalid at the first trial. This time, from out of nowhere, the prosecutors included "witness" Wang Hua, who allegedly saw some pamphlets, greeting cards and a few scrolls of calligraphy when the police searched the couple's home, and another person alleging that eight-hundred Falun Gong articles were stored on the hard drive of Ms. Sun’s desktop computer at home. In reality, no such person named Wang Hua existed. Also, as the lawyer pointed out in the first trial, the documents on file showed no desktop computer on the list of items confiscated from Sun Hong’s home, not to mention the hard drive and files.

Sun Hong told Judge Liu Lin at the court, "You yourself are guilty of sentencing innocent people as guilty."

Min Huirong said to Liu, "You are doing everything you can to declare us guilty. You should know that good or bad, one is to reap what one sows. I hope that you will think twice for yourself and your family members." Liu kept pounding the table to try to stop Min Huirong from talking.

Mr. Min and Ms. Sun’s family members asked Liu at the court, "Why do you sentence innocent people as guilty? What is wrong at all with trying to be truthful, compassionate and tolerant?" The police walked up and asked the family members to leave and said, "We know all this, but we cannot help. It is our job. Why don’t you appeal?!" The judge slipped away when people weren’t paying attention. Prosecutor Wang Chengxin did not say a word throughout the session.

SunHong’s colleagues were all very upset and felt it hard to believe upon learning about the sentencing. They thought that without evidence again them, Ms. Sun and Mr. Min would have been released, as opposed to being sentenced to five years in prison. They used to not believe too much that Falun Gong practitioners were persecuted. With the facts in front of them, they all believe it now. One policeman broke into tears when he learned about this case.

“Supplementary Information on the Case of Ms. Li Xianming, Who Was Persecuted to Death in Xiehong County, Sichuan”

“Cases of Karmic Retribution in the Changshou District of Chongqing City”