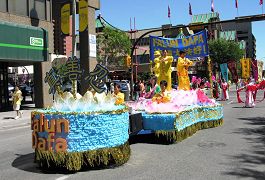 On the morning of July 8, more than a hundred Falun Gong practitioners held a parade in Chinatown of Calgary, a center of Canada’s petroleum industry. Vigorous and rhythmic drumbeats from waist drummers, a float with splendid color and elegant design, and beautiful and elegant ribbon dance and fan dance, exercise demonstration and music of "Falun Dafa is Good" displayed the wonderfulness of Falun Dafa. At the same time, practitioners held up banners and signs about the brutal persecution of Falun Gong in China, and they carried out the reenactment of live organ harvesting, and banners reading "Live Organ Harvesting is Unacceptable and Intolerable by Heavenly Principles," "Canadian Independent Investigation Confirms the CCP’s Live Organ Harvesting".

At the latter half of the parade procession, two western practitioners held a wreath with a huge Chinese character meaning "mourning".

An older couple from England was stunned after learning about Falun Gong practitioners who cultivate "Truthfulness-Compassion-Forbearance" having their organs harvested by the CCP. They encouraged practitioners to keep up their efforts. They said, "When Hitler slaughtered the Jewish people in WWII, just because nobody believed it, so many people were killed."

After the parade, practitioners continued their activities at the entrance to Prince’s Island Park in downtown. Their efforts drew the attention of many passersby.

Mr. Lu Decheng, who was called one of the "Three Heroes in Tiananmen," said at the rally, "After having suffered ten years in prison, I am not surprised at the CCP’s brutality. … but I feel very sad when seeing my own countrymen being killed." The organizer of the rally expressed, "We do not want to believe this is true, but it is indeed true. I’m very sad, but I am not surprised by the CCP’s cruelty."