On July 3 and 4, Falun Gong practitioners participated in Independence Day parades in Columbus and Montgomery, Ohio. Their well-decorated float, beautiful Tang Dynasty attire, colorful "Falun Dafa" and "Truthfulness-Compassion-Tolerance" banners, and peaceful and relaxing exercise demonstration were well-received by the spectators. More than 100,000 Ohio citizens witnessed the beauty of Falun Dafa. 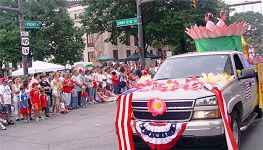 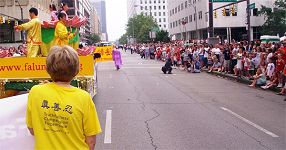 Ohio practitioners participated in an Independence Day parade in Columbus

This was the sixth time for practitioners to participate in the Columbus Independence Day parade, the largest one of its kind in Ohio. Falun Gong has been the only Asian group in the past many years. Given their consistent outstanding performance, the parade organizers positioned the practitioners' procession in the first segment of the parade in the past two years. The cute little practitioners meditating in lotus flowers on the float really caught the attention of many children and parents. 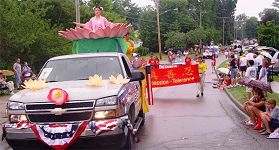 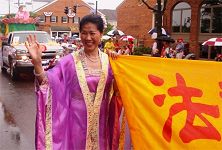 The city of Montgomery is an old, established community in the Cincinnati area, and it was the very first time for practitioners to participate in a parade in this city. When they initially applied for admission to the parade, some members of the organizing committee declined the application as they didn't know what Falun Gong is. After the practitioners clarified the truth to the organizers, their application was approved. 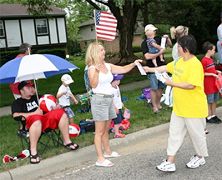 During the parade, the organizing committee rated each group. For their beauty and peace, the Falun Gong group was recognized by the committee with an "Outstanding Parade Group" trophy. Being the only Chinese group, Falun Gong was very eye-catching and their performance was well-received. Along the nearly two-mile parade route, almost all the spectators were reaching their hands out to acquire copies of Falun Gong materials from practitioners.