On November 4, 2001, Dafa practitioner Mr. Pan Hongdong from Heilongjiang was arrested by officers from Xingongdi Police Department in Tiefeng District, Qiqihar (reported previously on Clearwisdom: http://www.clearwisdom.net/emh/articles/2005/6/3/61473.html). In detention he was tortured on a Tiger Bench and was shocked in the genitals with electric batons. Pan Hongdong went on a hunger strike for 3 days. He was then sent to the Second Detention Center in Qiqihar City and detained unconstitutionally. At the end of 2002, Pan was sentenced to 10 years in prison. After the Chinese New Year in 2003, he was sent to Tailai Prison, Qiqihar, Heilongjiang Province. As a result of the torture, he died at 8:18 a.m. on May 15, 2005. 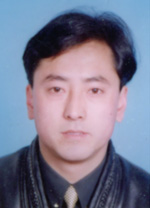 On August 26, 2004, the Second Division of the 9th Division Prison District of Tailai Prison was trying to force Pan Hongdong to write a "guarantee statement" to give up practicing Falun Gong when deputy prison instructor Cao Minjiang ordered to have Pan Hongdong tied to a stand. Both of Pan's hands and legs were tied to an "I"-shaped bracket attached to a stand, with a metal bar locked across his chest. He was forced to sit on a cement floor from day to night. Sometimes during the day, they took him outside and paraded him around in public.

Three days later, Pan Hongdong went on a hunger strike. On September 1, 2004, while under extreme persecution, Pan wrote a guarantee statement to give up Falun Gong against his will. At that time he was so severely tortured that the other prisoners couldn't bear to look at him. A prisoner secretly gave Pan Hongdong a cushion to sit on. When the vicious prison guards found out about the cushion, the guards punished the prisoner for the kind gesture.

Those who participated in the persecution include the Second Team Instructor He Hongqing and Chang Ansheng of the "Transformation" Team.

After Pan passed away, his family members raised an appeal about his case. An investigator from the Procuratorate's Office went to Tailai to investigate his death. The guards ordered inmates Gao Ming and Zhong Shixiang, both serving terms on criminal charges, to falsify evidence and deny all allegations of persecution.