After the disclosure of the Chinese Communist Party's anti-human crime of live organ harvesting through the destruction of Falun Gong practitioners' bodies, the Falun Dafa Association and the Clearwisdom website established the "International Coalition to Investigate the Persecution of Falun Gong in China (CIPFG)" on April 4, 2006. CIPFG called on all those who are in a position to investigate to provide evidence of organ harvesting.

Clues for Investigation: Three people from Linghai City in Liaoning Province Received Liver and Kidney Transplants in Beijing's No. 309 Hospital in May

Around May 1 of this year, I learned from causal conversations that two people in my area had received liver transplants in Beijing's No. 309 Hospital. One was Liu Xiaofang, male, in his 50s, the deputy director general of the Public Security Bureau. Another was Sun Changfa, male, in his 60s, a retired cadre of the Public Security Bureau. They spent about 20 days in the hospital and 200,000 yuan (about $24,972 US) before suitable liver suppliers were found for them. When we tried to learn more details from relevant resources, they grew cautious and would not reveal more.

Yang Zhicheng, Deputy General Manager of the Electric Power Group Corporation in Linghai City, received a kidney transplant in the No. 309 Hospital in Beijing around November 2005. It was said that he waited for only about ten days for a suitable kidney to be found for him.

Clues for Investigation: "The First Kidney Transplant" of No. 4 People's Hospital in Chenzhou City, Hunan Province 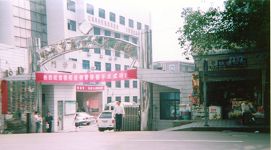 The above photo is the No. 4 People's Hospital in Chenzhou City, Hunan Province, formerly the Chen County People's Hospital. It was accredited as a First Grade Hospital within the second rank. The banner hanging over the gate says "Celebrate the First Successful Kidney Transplant in our Hospital." The photo was taken on May 4, 2006. Where did the kidney come from?

The Qilu Evening Paper reported in late May that the State Hospital of Jinan Province had successfully performed a liver transplant.

Another resource revealed that an organ transplant operation was performed at the No. 5 People's Hospital in Qindao City in April.

After the exposure of the Sunjiatun Concentration Camp, it was discovered that many Falun Gong practitioners were being held secretly in Ankang Hospital in Gongzhuling City, Jilin Province. It is not clear how many practitioners were there or from where they were transferred. Currently, access to Ankand Hospital is tightly controlled. It is very difficult to visit the patients there.