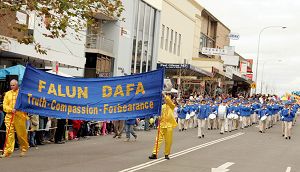 The Falun Gong entry has been invited to participate in this event for the seventh time. At the front of the Falun Gong procession was the Divine Land Marching Band. More than sixty Falun Gong practitioners wore blue caps, dressed in blue coats and light yellow trousers. They played the song, "Falun Dafa is Good."

Following the marching band was a float on which lovely young practitioners in golden yellow exercise suits were doing the sitting meditation. Behind the float came the colorful and beautiful Fan Dance, and "Celestial Maidens" in elegant Tang Dynasty costumes gracefully dancing to the melodious music. The waist drum team brought up the rear. Vigorous drumbeats conveyed the message of "Truthfulness-Compassion-Forbearance." The audience along the parade route constantly applauded.

When the Falun Gong entry was close to the presiding stage, the DJ's introduction was heard from the loudspeaker, "Falun Dafa is also called Falun Gong, through meditation and exercises improving one's physical and mental health. It is also a traditional Chinese self-cultivation practice. It promotes the universal characteristics of 'Truthfulness-Compassion-Forbearance.' It has been spread to over eighty countries in the world. There are more than 100 million practitioners. The five sets of exercise are easy to learn and free of charge..."

In 2000, when the Chinese Communist Party attempted to extend its persecution of Falun Gong to Blacktown City, the city officials and organizers of the parade resisted the pressure from the CCP's Consulate, and insisted on inviting the Falun Gong group to participate in the city's festival parade. Several years passed, and Falun Gong practitioners' peacefulness and elegant demeanor have taken root in people's hearts, and won support form righteous city councilors and kind people from different races and nationalities in the city.