(Clearwisdom.net) On May 10, 2006, "The Journey of Falun Dafa" photo exhibition was held in Furth im Wald, a small city in Bavaria, Germany. Local media reported the photo exhibition. 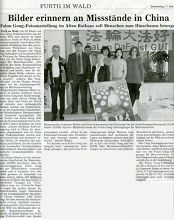 Photos from the Cham Daily report on the exhibition

"We want to have people see this photo exhibition, and hope that through these pictures people will understand the tragedy taking place in China now," Ms. Teng, a member of the Falun Gong Human Rights Working Group, said at the opening ceremony of the photo exhibition.

The Mayor of Furth im Wald, Johannes Mueller, mentioned in his speech that Falun Gong is an ancient Chinese cultivation of body, mind, and spirit, guided by Truthfulness-Compassion-Forbearance. There are five sets of simple and easy exercises that have a powerful effect. However, Falun Gong was banned by the Communist Party of China in 1999. Mayor Mueller said, "This peaceful cultivation practice was slandered as superstition in China. Falun Gong practitioners were persecuted from then on and suffered cruel torture." Mayor Mueller said that he wished that more people could experience the practitioners' belief in Dafa and Truthfulness-Compassion-Forbearance from the photo exhibition.

Mr. Roemer, from an international human rights association, mentioned that Falun Gong was well received by the people and the Chinese government shortly after it was introduced to the public in 1992. Within seven years, there were 100 million people practicing Falun Gong. The Chinese Communist Party initiated its persecution of Falun Gong in 1999. From then on, Falun Gong practitioners have been persecuted and tortured. Not long ago, the news that living Falun Gong practitioners' organs were harvested for profit at secret concentration camps shocked the world. Mr. Romer stressed, "China is the Number One country for torture."

Not long ago, Falun Gong practitioners risked their lives to successfully interrupt national TV broadcasting to expose the CCP's lies and to let people know the truth. The goal of Falun Gong and the international human rights organization is to help more people know about the persecution of human rights, and urge people around the world to take action. "Everybody should contribute their own strengths to prevent inhumane persecution."

Then, Ms. Teng and members of the Falun Gong Human Rights Working Group gave the mayor a guided tour of the photo exhibition.

The above-mentioned report was also published in the free weekly, Chamland Aktuell on May 17. 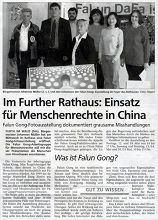 Report in the Chamland Aktuell

Falun Gong is a traditional Chinese practice of body and mind. Like a lot of exercises in Asia, Falun Gong tries to balance the body and mind as well as the harmonious characteristics of nature and the universe with exercise movements and meditation. Falun Gong has five sets of exercises. While obtaining physical health, Falun Gong also has higher goals, that is, the elevation of the mental realm. Falun Gong requires giving up unhealthy characteristics such as envy, desire, selfishness and other negative habits. Falun Gong requires the practice of Truthfulness-Compassion-Forbearance in daily life. Following Truthfulness-Compassion-Forbearance can make people obtain a deeper understanding of the connection between life, nature and the universe.

“Switzerland: Exposing the Chinese Communist Party's Crimes to the People in Lucerne (Photos)”