(Clearwisdom.net) On June 15, 2006, the People newspaper of Leipzig in Germany carried an article entitled "Her Life is Facing Danger", reporting the news that the wife of a Chinese student abroad has been arrested and detained because she practices Falun Gong. 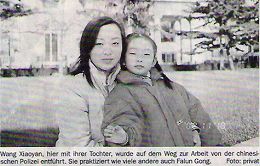 Xiaoyan Wang and her daughter

The article talks about thirty-three-year-old Zhentong Zhang, who is from Dalian City in China and is now studying Communications and Technology at Leipzig University of Germany. On May 27, 2006, Zhentong Zhang's wife was about to go out to work when she was arrested by policemen in front of her home. This happened because Zhang's wife practices Falun Gong, as several tens of millions of other Chinese people do. Policemen rushed into her home and confiscated her computer, printer, external hard disks, Falun Gong books and leaflets. 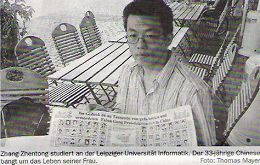 Mr. Zhang disclosed to the People of Leipzig: Since 1999, the persecution of Falun Gong has been going on. Up to now, my wife has already been arrested three times. Her passport was confiscated a long time ago, so she cannot come to Germany to visit me and neither can I go back to see her. The persecution happening in China is, in fact, an action of severely trampling on human rights. The number of Falun Gong practitioners who have died as a result of the persecution has already reached 2,898. After the incident of the Chinese Communist Party removing organs from living Falun Gong practitioners, Mr. Zhang is very worried about his wife's fate: "I know that her life is now at stake. In China, prisons and forced labor camps are, without fail, the world's hell."

The article says: The participation of the Protestant Church in Leipzig also strongly expressed support for Mr. Zhang. The priests from Thomas's Church signed his name on Mr. Zhang's open letter to Angela Merkel, the German Prime Minister.

Mr. Zhang said: "The persecution of Falun Gong is extremely ridiculous. The reason why Falun Gong was banned in 1999 is only because of Jiang Zemin, former General Secretary of the CCP, who made an arbitrary decision and took preemptory action. His actions included jealousy and fear because Falun Gong practitioners outnumbered the CCP members by over 20,000,000 people. Up to now, many CCP members have also started to oppose the persecution. Such a situation shouldn't be allowed to continue, where Falun Gong practitioners are imprisoned by the CCP because they are firm in believing in the principle of Truthfulness-Compassion-Forbearance."

What is Falun Gong? Mr. Zhang explained to the People newspaper: "Falun Gong is a traditional Qigong in China and an ancient way of self-cultivation."

Haroldo Rodrigues, another Falun Gong practitioner who lives in Leipzig, accepted an interview from People. He is a piano teacher from Brazil and he settled down in Leipzig in 1988. He told the paper that Falun Gong is a practice of improving both body and mind, and not an organization. It has neither an organizational structure nor capital. Falun Gong accepts neither member's fees nor donations. That is why Falun Gong cannot be controlled, bribed, bought over or utilized by some others in China. Mr. Haroldo Rodrigues and those who share his interest get together and do the Falun Gong exercises at a place near the Children's Kursaal at 2pm every Sunday.

Zhentong Zhang is calling on all kind people in Germany to help and make great efforts so that his wife and eight year old daughter can re-unite with him. Mr. Zhang deeply believes that Leipzig is the right place to do such a thing.

“Hong Kong: Arrested for Clarifying the Truth in Mainland China, Ms. Liu Ding Was Rescued Back to Hong Kong on June 22”