On June 15, 2006, Robert Bailey, Chair of Human Rights Commission of the City of San Jose, California, wrote a letter to Governor Arnold Schwarzenegger, urging the attention of the California State leaders to the investigation on the charges of organ harvesting brought against CCP authorities. Below is the text of the letter.

Subject: Urging the attention of the California State leaders to the investigation on the charges of organ harvesting brought against Chinese authorities

Recently the Epoch Times newspaper has published reports that alleges charges against the Chinese authorities for the crime of organ harvesting on live people. It is reported by these articles that the organs of prisoners of conscience in China, including many Falun Gong adherents, have been secretly harvested and sold on the market for profits. The bodies were later burned to destroy the evidence.

Several residents living in County of Santa Clara have families jailed and missing in China because of practicing Falun Gong. The reports of the organ harvesting have made these residents very worried and concerned about their relatives in China.

Attached please find a letter signed by the eighty congressional leaders urging President Bush to "shine a light on this issue..." in order to "help save the lives of million of innocent souls..."

The San Jose Human Rights Commission would like to join the efforts made by our congressional leaders, and urge our government an community to express dissatisfaction with practices as reported. Helping the investigation on this issue may potentially save the lives of millions. 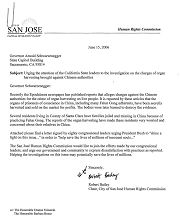