Sweden: Exposing the Organ Harvesting from Live Practitioners and Supporting the Eleven Million People Who Have Withdrawn from the Party (Photos) 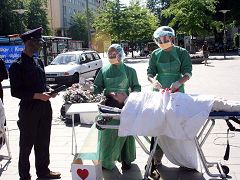 On June 17, 2006, Falun Gong practitioners from Sweden and the Service Center for Quitting the CCP in Sweden held an activity in Odenplan plaza in the center of Stockholm to support the eleven million withdrawals from the CCP. To expose CCP brutality, practitioners also re-enacted the harvesting of organs from live people.
People learn the truth about Falun Gong. Signing names to support withdrawals from the CCP and oppose the persecution.

Display boards and the re-enactment of CCP organ harvesting showed passersby the crimes happening in CCP labor camps and concentration camps. Volunteers passed out flyers exposing the CCPâ€™s crimes and clarifying the truth about quitting the party. They encouraged people to sign a petition in support of the withdrawals from the party and to oppose the persecution. It was a beautiful, sunny day. Many people were attracted to the truth-clarifying board and re-enactments.

Katerine, a volunteer from the Service Center for Quitting CCP, held a sign which said: "Support Eleven Million withdrawals from the CCP". She said that she is very happy for those Chinese people who woke up and quit the party.

It was the first time that practitioners re-enacted the organ harvesting in this city. Upon seeing the CCPâ€™s brutality, many people were shocked, and kept saying "Unbelievable."

Some local Chinese people were also shocked by the re-enactment. Many of them condemned the CCPâ€™s brutality, and some were worried about the situation in China. Two young Chinese ladies admitted that the CCP is very bad, but they said that the re-enactment made China and Chinese people lose face. Practitioners told them their experiences of being persecuted in China, and pointed out the biggest misunderstanding of Chinese people, which is, that due to the long time brainwashing by the CCP, and being deceived by the CCPâ€™s lies year after year, in many Chinese peopleâ€™s minds, the nation is equal to the party, and many Chinese think that the country is the CCPâ€™s country, and the people are the CCPâ€™s people.

Practitioners suggested that the ladies read the "Nine Commentaries on Communist Party" and eliminate the party culture in their minds.

After watching the re-enactment, an elderly lady felt sympathetic to practitioners. She said with tears, "It is too horrible. How can it be so horrible? I have never heard such a horrible thing. It is too bloody. The CCP is much worse than the Nazis."

A lady said: "It makes me sick and I want to throw up. I cannot imagine that in modern times, such a horrible thing would happen. It is really horrible to see such a thing happening in another country. Falun Gong practitioners have been persecuted. It is very bad. I am glad that you are exposing this thing. Please donâ€™t give up no matter what happens. I am also glad to know that so many people have quit the CCP."

Practitioners collected a lot of signatures and many people learned the truth about Falun Gong and quitting the party.