(Clearwisdom.net) On the last Sunday of May 2006, Falun Gong practitioners participated in the Protest Festival in downtown Brno (Moravia, Czech Republic). The festival aimed to provide an opportunity for people to raise their concerns in society. Among the participants were activists for human rights, the environment, and other causes. 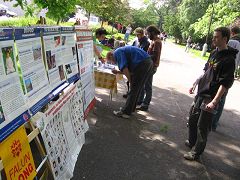 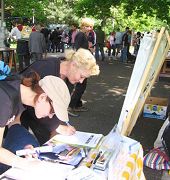 It was a very friendly and compassionate atmosphere. Many people showed concern about human rights and interest to know details about the persecution. They also learned how Falun Gong practitioners in China risk their lives to expose the CCP’s deceptive propaganda.

“Germany: Falun Gong Practitioners in Dortmund Raise Awareness of the Persecution During the World Cup (Photos)”