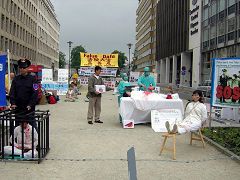 Practitioners re-enact the tortures in front of the European Parliament building to call for an end to the persecution.

Some practitioners demonstrated the exercises. The whole activity was peaceful and orderly. Many attendees of the EU meeting and passersby stopped at the activity to listen and learn the truth of Falun Gong and the persecution. One lady, who couldn't believe what she read and heard, asked practitioners: "This is just a show, not real, right?" When practitioners told her that everything being re-enacted here is real in China, and has lasted for seven years, she was shocked and said that this crime must be stopped. Some passersby asked practitioners when they would hold the next activity.

The Associated Press, Belgium National TV Station and some human rights organizations came to the activity to take video and interview the practitioners.