On June 7, 2006 the World Cup France-China warm-up match was held at Geoffroy-Guichard in Saint Etienne in central France. Soccer is the favorite game of the French people, and the stadium, seating 40,000 people, was filled to capacity. Before the match, at the entrance of the stadium, French Falun Gong practitioners exposed the Chinese Communist Party's (CCP) seven-year-long persecution of Falun Gong and the harvesting of organs from living Falun Gong practitioners. Many French fans took balloons that read, "Falun Dafa Is Good" and, "The World Needs Truthfulness-Compassion-Forbearance" into the stadium.

The Falun Gong practitioners' booth was set up at the stadium entrance, where the spectators lined up to enter the stadium. Western practitioners used a loudspeaker to explain to people about the persecution of Falun Gong in China, and many kind and righteous people walked out of the queues to sign the petition to call for an end to the persecution. A group of Chinese people also waited in the queues. Chinese practitioners used a loudspeaker to read the Nine Commentaries on the Communist Party to them. These Chinese people quietly listened until they entered the stadium. 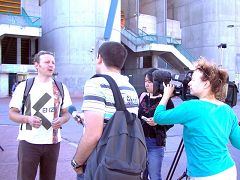 When asked whether it was difficult to hold such an activity near the stadium, Stephane replied that during World War II, people's disbelief in the existence of the Nazi's genocide in concentration camps made it very difficult for witnesses to come forward with their own experiences. "Right now it is still a challenge for us to gain widespread support, especially since the French government is under tremendous economic enticement and pressure from the Chinese Communist regime."

A gentleman who took Falun Gong leaflets told the reporter that where there is totalitarianism there are death camps and concentration camps. But all these will collapse just as the former Soviet Union had done, he continued. He felt that the Falun Gong practitioners had done well in making people aware of what is happening in China. The CCP is more unscrupulous than the former Soviet Union, as the CCP holds onto its power through controlling the economy. Yet, this man is certain the CCP will crumble.

A French woman helped practitioners distribute truth-clarification materials. She said, "As I am a human rights defender, I think we must fight various barbaric acts that are against civilisation. Today the Chinese team is invited to play in this match. This is a good opportunity for us. Such protests are very important for maintaining human dignity."

She also said, "People's pursuit of spiritual beliefs should not be prohibited. This is a basic human right."

Many French fans had their photos taken with Falun Gong practitioners after obtaining balloons that read, "Falun Dafa Is Good" and, "The World Needs Truthfulness-Compassion-Forbearance." Practitioners Stephane and Mathieu went into the stadium wearing shirts that read, "36 Death Concentration Camps in China," and, "Stop Persecuting Falun Gong." After the game, they called out to the Chinese officials in the VIP section, "Falun Dafa is good. Stop persecuting Falun Gong!"