Japan: Rally and Parade Held in Yokohama to Support Eleven Million Withdrawals from the CCP (Photos)

(Clearwisdom.net) On the afternoon of June 11, 2006, a rally jointly sponsored by the Global Service Center for Quitting the CCP (Japan branch) and Japanese Epoch Times was held in the rain in a park in Yokohama, to support the eleven million courageous Chinese people who have renounced the CCP and its affiliated organizations. After the rally, the attendees held a parade down Chinese Street.

A representative from the Service Center for Quitting the CCP (Japan), reporter Zhang Benzhen from the Epoch Times, Chairman Li Song from the Federation for A Democratic China (Japanese Branch), a representative from the Japanese Falun Dafa Association, Chinese scholar Zhang Yufu, who is living in Japan, made speeches at the rally. They condemned the CCP's organ harvesting from living Falun Gong practitioners. They also called on people to see clearly the CCP's true nature and quit the CCP.

After the rally, the attendees held a parade in the rain. The waist drummers led the parade procession. People in the parade held banners reading, "The Number of Withdrawals from the CCP Has Broken through 11 Million," "Investigate the CCP's Harvesting Organs from Living Falun Gong Practitioners." They also shouted loudly all the way in both Japanese and Chinese, "Heaven Will Eliminate the CCP," and "Quitting the CCP is for Your Own Safety." 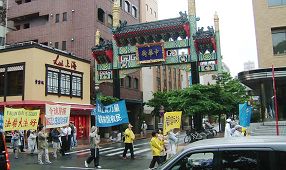 A Japanese man saw the parade and was moved to tears. He stated while being interviewed that the CCP's brutality is intolerable. He hoped Falun Gong will keep up their efforts. He said, "We support you!" When he asked if he could join the parade and was welcomed, he walked with the parade procession until the end.

On Chinese Street, Mr. Wu who came to Japan from Taiwan over 30 years ago and opened an acupuncture clinic said, "I've read the Nine Commentaries on the Communist Party. The CCP is too bad, extremely bad!"

A passerby read the information and said, "The CCP must immediately stop making money out from human organs! As a Japanese, I appeal from the bottom of my heart. I hope the Japanese Government will understand."

“The Pitt News: University Student Clarifies the Truth on about Falun Gong”