(Clearwisdom.net) On May 1, 2006, International Advocates for Justice (IAFJ) published some statistics which show that the Falun Gong group has filed as many as 54 civil and criminal lawsuits in 33 different countries on the five continents against Jiang Zemin (former Chairman of the Chinese Communist Party), Luo Gan and 30 other high-level officials of the Chinese Communist Party that have been playing the most active roles in the persecution of Falun Gong. According to IAFJ, Falun Gong has filed the largest number of human rights lawsuits in the 21st century and the charges are among the most severe international crimes defined by international criminal laws. 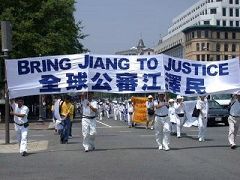 As of April 2006, the Falun Gong group has filed lawsuits against Jiang Zemin in 16 countries around the world.

As of today, Falun Gong has won at least five of the civil suits in the United States and Canada. For those lawsuits that have been rejected or dropped on the grounds of lacking jurisdiction or immunity, Falun Gong's attorneys have filed appeals. At present, most of Falun Gong's global human rights lawsuits are being processed by the courts or are in the process of being filed. As for those requests for a trial or an investigation made to the international justice system, Falun Gong is still waiting for a reply.

According to IAFJ's statistics on Falun Gong's human rights lawsuits from 2001 to April 2006, Falun Gong practitioners have filed lawsuits in 33 different countries on the five continents against Jiang Zemin, Luo Gan and 30 other high-level officials of the Chinese Communist Party that have been playing the most active roles in the persecution of Falun Gong, as well as five lawsuits against Chinese embassies and consulates for slander. The statistics also include Falun Gong practitioners' complaints and requests for an investigation or a trial made to prominent international justice organizations, such as the United Nations' Human Rights Committee, its Torture Committee, International Criminal Tribunal, European Court of Human Rights, etc.

For the past six years since 2001, Falun Gong practitioners have filed at least 54 civil and criminal lawsuits, not including lawsuits against some overseas Chinese media for slander.

International Advocates for Justice (IAFJ) is an international non-governmental organization registered in the state of New York and founded in July 2004. Its members include human rights attorneys and professionals working in the field of justice worldwide.

“Western Practitioner Looks Back on Seven Years of Polishing Articles for Clearwisdom.net”