Denmark: Clarifying the Truth of the Persecution on International Labor Day (Photos)

(Clearwisdom.net) May 1st is the "International Labor Day". Usually many Denmark workers will take half a day off and gather at Folkets Park in Copenhagen to enjoy some leisure time. 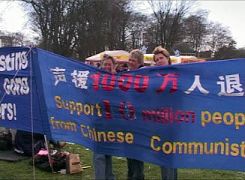 The Falun Gong practitioners in Copenhagen have come to this park every year on this holiday. In the bustling crowd, they tell people the truth about Falun Gong. Compared to previous years, May Day this year was quite special because the CCP's atrocities of harvesting organs from living practitioners for profit has been recently exposed and attracted the world's attention. Meanwhile 10 million brave Chinese people have quit the CCP.

On the afternoon of May 1, more than ten thousand people came to the park. The banner written in English "Stop harvesting organs from Living Falun Gong practitioners", and the banner written both in Chinese and English "Support 10 million withdrawals from the CCP" were especially eye-catching at the site. People in succession came to learn more and ask questions.

A middle-aged western man wrote down the Falun Gong website and the Copenhagen group practice site information after reading a Falun Gong flier. He also asked many questions in earnest. Some kind-hearted passers-by expressed their concerns after learning about the CCP's abhorrent crimes against Falun Gong. When hearing that Falun Gong practitioners in China are being tortured to death and their organs were being removed while they're still alive, a young western man told the practitioners that he wanted to know how to rescue the Falun Gong practitioners persecuted in China. Another kind-hearted young man was in tears after listening to a practitioner's introduction. He quietly stood aside and prayed for Falun Gong and the practitioners murdered by the CCP. Once, three women stood behind a banner to support it against strong wind with their bodies, quietly demonstrating their support for practitioners.

A practitioner participated in the truth-clarifying activities in Washington DC when Hu Jintao visited USA, and witnessed the power of the book Nine Commentaries on the Communist Party. Therefore, this practitioners decided to use loudspeakers to read the English version of Nine Commentaries. Many people stopped to listen, and a lot of people took the initiative to acquire related materials as well as the book.

“WOIPFG Representative on Phone to Jiang Zemin: "You have committed genocide against Falun Gong..."”