(Clearwisdom.net) Since the exposure in March of the CCP's crimes of harvesting organs from living Falun Gong practitioners, practitioners in Malaysia have been continuously exposing the CCP's inhuman atrocities to the public and collecting signatures to urgently stop the CCP's crimes. On April 29-30 2006, practitioners went to expose the CCP's atrocities of organ harvesting in three locations: the night fair, a park and a tourist site hotel. Different from previous times, they used a large screen TV to play the video Nine Commentaries on the Communist Party to help the public gain a deeper understanding of the CCP's evil nature. 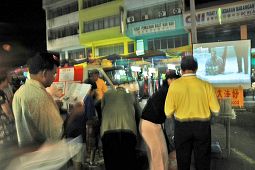 Playing a video of the Nine Commentaries at a night fair, distributing materials and collecting signatures

On the evening of April 29, practitioners played a video of the Nine Commentaries at a night fair. Early the next morning at 6:00 a.m. on April 30, the practitioners came to the People's Park. They first played the video of the Nine Commentaries for those doing morning exercises. After one hour of playing the video, practitioners exposed the CCP's vicious acts of harvesting organs from living Falun Gong practitioners in three different languages through a microphone. They also distributed materials and collected signatures. At the same time, they reenacted the CCP's of live organ harvesting, exposing the CCP's crimes to the public.

Most Chinese citizens know that it is quite easy to receive organ transplants in China, but have never thought about the source of those organs. Many people felt shocked after learning about the CCP's atrocities of harvesting organs from living Falun Gong practitioners, and signed the petition. They also requested VCDs of the Nine Commentaries to further learn about the CCP's evil nature.

Many people in Malaysia cannot forget the painful experience during 1948-1949, when the Malaysian people resisted the atheistic Malaysian communist party. After learning about the CCP's inhuman atrocities, the local citizens understand even more why the Malaysian government has not dared to slack off in resisting the communist party for 41 years.

At noon, practitioners went to one of the tourist spots that the Chinese tourists favor. They played a video of the Nine Commentaries for those tourists, exposing the appalling facts of the CCP's live organ harvesting.

It was very hot at noontime, and tourists getting off the tour coach quickly ran to the restaurant to dodge the burning sun. Before they went back to get on the coach, they stopped to view the display boards, took materials and listened to practitioners' truth clarification. Mr. Xie, coordinator of the activity, said that as it was the May 1 holidays, they expected many Chinese tourists, so they took the opportunity to clarify the truth to more Chinese people.