(Clearwisdom.net) On May 1, New Zealand Prime Minister Helen Clark replied to the Falun Dafa Association's letter. In her letter, the prime minister stated that the New Zealand government supports the UN Special Rapporteur on Torture to investigate Chinese concentration camps and expressed concern over the human rights and religious freedom situation in China. Below is a scan of the original letter. 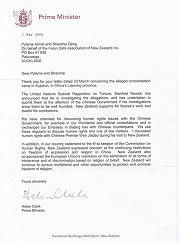 “Taiwan: Taichung Residents Rally to Support 10 Million Withdrawals from the CCP and Call for Investigation on Organ Harvesting (Photos)”