Germany: Passersby in Mannheim Are Shocked Over the Organ Harvesting from Living Falun Gong Practitioners in China (Photos)

(Clearwisdom.net) Saturday, April 24, 2006, local Falun Gong practitioners organized an information day in downtown Mannheim. They informed passersby of the gruesome organ harvesting from living Falun Gong practitioners in China's labor camps and concentration camps, which are carried out for profit. They told the listeners that the bodies are burned after the organs are removed to destroy all evidence. 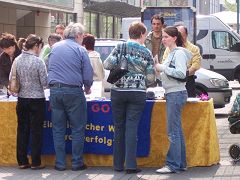 People show concern over the facts

There was much activity in the pedestrian zones and the passersby were appalled about the activities in China and the vicious deeds of the Communist regime. Many signed the petitions without a second thought. The petition appeals to the German Federal government to launch an immediate investigation into the allegations - the inhuman activities at China's concentration camps - an end to the murder and torture and the immediate release of all detainees.

The practitioners pointed to the urgency of such support, as in China there are tens of thousands in mortal danger at this time. The Communist regime is under great pressure to destroy all infamous evidence before the so-called law forbidding any further organ harvesting goes into effect on July 1. All passersby were asked to send a letter to different politicians.

There were times when there were many people listening to the practitioners explanations at the information booth, and many looking at the harmonious Falun Gong exercises that were demonstrated behind the booth. Many were stunned to hear about the cruel atrocities committed by the Communist regime.

One practitioner offered a lady who was rushing by in a hurry a flyer and said, "Hidden concentration camps discovered in China!" The lady stopped immediately, turned around and said with a horror-stricken voice "Concentration camps? Where?" The practitioner had the full attention of the lady and thus could brief her about the hidden camps and the illegal organ harvesting. The lady was visibly shaken and expressed her deepest sympathies to the practitioners in China. She asked why the media does not report this and promised to support this cause and to circulate the information.

That Saturday many people in Mannheim took the opportunity to hear about the actual ongoing situation in China, to position themselves and to denounce the crimes committed by the Chinese regime.