(Clearwisdom.net) On Tuesday May 2, 2006 at 11:00 a.m., three members of the Christian Defense Coalition and Generation Life knelt in front of the White House to pray for an end to the persecution of Falun Gong in China, and to show solidarity for Falun Gong practitioner Dr. Wenyi Wang, who shouted out to Chinese communist leader Hu during his meeting with Bush at the White House. The three Christian leaders were then arrested and released the same evening. 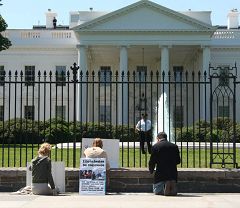 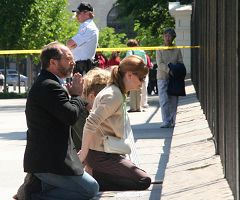 On Tuesday May 2, 2006 at 11:00 a.m., three members of the Christian Defense Coalition and Generation Life kneel in front of the White House to show solidarity for Dr. Wenyi Wang, who shouted at the White House, and to pray for an end to the persecution of Falun Gong in China.

The three Christian leaders who participated in the peaceful prayer were Rev. Patrick J. Mahoney and his wife Katie of Seattle, WA, along with Brandi Swindell of Boise, ID, who traveled to Washington DC specifically to pray for Falun Gong practitioners.

Prior to their peaceful prayer, chairman of the Christian Defense Coalition Rev. Patrick J. Mahoney made a speech. He said, "We will go there, and kneel and pray in front of the White House for an end to the organ harvesting - which is beyond words as to how despicable it is. We will ask President Bush to drop all charges [against Dr. Wang], and when we are arrested and go to jail, we are standing in solidarity with our sister Dr. Wenyi Wang, and with all the Falun Gong practitioners who are in jail in China."

Chairman of Generation Life Ms. Swindell said, "I was saddened to see faith trampled on in China.

The Mahoneys and Ms. Swindell turned and made their way to the White House gate, where they kneeled in prayer, with signs on their backs showing pictures of Dr. Wenyi Wang, and calls to end organ harvesting of Falun Gong practitioners.

Mahoney, still on his knees, called out to the scores of tourists, explaining why he was there. "Right now in China, peaceful members of Falun Gong are persecuted and their organs harvested. We call upon President Bush to uphold the basic principles that no one should be persecuted, intimidated, or harassed for their religious beliefs."

The three Christian leaders were released the same evening on May 2, and told Dr. Wang on the phone that during the hours of detention, they were even more worried about Dr. Wenyi Wang and Falun Gong practitioners who are suffering persecution in China, and had been praying for them.

Rev. Mahoney said, "We convey a very specific message: First, stop the persecution against Falun Gong practitioners' freedom of religious belief. Second, President Bush, please support the principle for the founding of America. If Dr. Wenyi Wang were sentenced to jail, it would send out a terrible message to the world: America has not shouldered the responsibility of protecting freedom of religion and the right to freedom. If Dr. Wang is found guilty, it would lead to the Chinese Communist regime intensifying its persecution of Falun Gong and other religious groups."

Rev. Mahoney said, "We request to drop all charges against Dr. Wenyi Wang. When Dr. Wenyi Wang shouted out her appeal, she raised people's awareness of the CCP's terrible crimes of severe human rights abuse and its religious persecution of Falun Gong practitioners. America has been supporting freedom of religious belief, and supported speaking out boldly against the persecution of human rights."

Director of communication in the Christian Defense Coalition Ms. Katie Mahoney said, "We want to speak to China, let these people enjoy the freedom of religious belief. We want to speak to America, resist the most horrible tragedy."

Chairman of Generation Life Ms. Swindell said, "I stand together with Dr. Wenyi Wang and all Chinese people. The persecution that is continuing in China is so appalling, a lady suffering persecution is facing charges for speaking out boldly the unfair treatment she has been subjected to, as an American, I feel shame for this."

Ms. Swindell called upon the American people to quickly wake up, to learn about the horrible human rights abuse taking place in China and the recently revealed appalling atrocities of harvesting organs from living Falun Gong practitioners.

Dr. Wenyi Wang expressed her deep appreciation for the three Christian leaders' solidarity. Dr. Wenyi Wang said, "This is not only support for myself, but for tens of thousands of Falun Gong practitioners who are suffering persecution in China."

It was reported that the three Christian leaders would appear at the "Friends of Wenyi" rally in front of the Washington DC U.S. District Courthouse at 8:30 a.m. on Wednesday May 3, continuing to appeal to American society to pay attention to the CCP's atrocities of persecuting Falun Gong practitioners.

“Montreal, Canada: Commemorating the Seventh Anniversary of "April 25" Appeal, Calling for a Thorough Investigation into Persecution of Falun Gong (Photos)”

“Mr. Liu from Jiaozhou is Missing and Possibly Murdered by the Public Security Bureau in Zhucheng City”