Ms. Li Chunxiao is Being Tortured in the Eighth Ward of Liaoning Province Women's Prison

The real criminals detained in the Eighth Ward of Liaoning Province Women's Prison are directed to torture Falun Dafa practitioners. Falun Dafa practitioner Ms. Li Chunxiao (a teacher employed by Dalian City Twenty-first Middle School in Liaoning Province, arrested in early 2005) was tortured by female prisoners Qin Liying and Zheng Qiu as soon as she entered the Eighth Ward. They tied her hands behind her back, and forced her to sit in a wooden box measuring less than 2 feet high, 3.5 feet long, and 1.5 feet wide (see illustration below). She could not raise her head due to the low height of the box, and her legs had to be bent because the box was short. In order to prevent her from screaming, they taped her mouth shut. Ms. Li Chunxiao was sealed in that box from 6:30 a.m. to 9:00 p.m. She was shivering when she was let out and could barely walk. 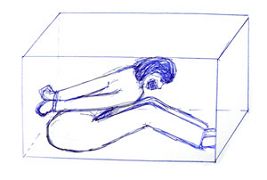 The water room, shower room, activity room, reading room and cell 412 located at the end of the hallway are used to torture Falun Dafa practitioners. After the other prisoners washed and went to bed, Ms. Li Chunxiao was forced to go to one of these rooms to be tortured. The torture included being stripped, forced to go bare foot, poked with needles, having several dozen pans of cold water poured onto her during the winter, being stripped and forced to sit with her legs separated, then kicked in her private parts. Sometimes Ms. Li would be tortured until midnight, and sometimes she would be tortured until early morning. Ms. Li Chunxiao has a fist-sized dark ring around both of her eyes, and her face is all covered with purple bruises.