(Clearwisdom.net) Ms. Wang Wenyi, who shouted her protest to Hu Jintao at the White House, came to Boston on May 24, 2006 at the invitation of several Chinese and English media outlets. She told the media about the Chinese Communist Party's (CCP) crime of harvesting organs from living Falun Gong practitioners. 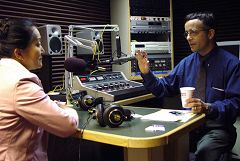 In the morning, Wang Wenyi had an interview with well-known program host Jordan Rich for WBZ NewsRadio. The station covers 38 states in the US and all of Canada. During the interview, Wang Wenyi elaborated on the motivation behind her shouting at the White House. She had learned, from the two witnesses who had come to the US to expose the organ harvests, that thousands of Falun Gong practitioners have had their organs harvested while they were still alive at the Sujiatun Concentration Camp, and their murdered bodies were cremated to destroy the evidence. But after the crimes were exposed, the CCP took three weeks to covertly remove all evidence of crimes, and then invited US officials to go visit the site. As a result, nothing was found there.

Wang Wenyi continued, explaining that she had paid visits to many media and important government officials together with the witnesses, but because of an emphasis on economic interests, no media, governments nor the international community paid due attention to it. From the investigation of some independent media and non-governmental organizations, prior to July 1, the CCP is hastily killing people to destroy eyewitnesses and evidence of these crimes. Considering that Falun Gong practitioners are facing the danger of being killed at any moment, Wang Wenyi felt she had no alternative but to take that action in this critical condition and under the focus of the whole world.

The host showed deep sympathy after listening to her explanation. He said that he had not learned about the CCP's persecution of Falun Gong until Wang Wenyi shouted her protest to Hu Jintao at the White House. Afterward, their topic focused on the human rights situation in China.

Wang Wenyi has an interview with the Chinese media

During lunchtime, five Chinese media outlets in Chinatown interviewed Wang Wenyi. The journalist from the World Daily published a report entitled, "Wang Wenyi: Shouting Protest to Hu Jintao at the Welcoming Ceremony at the White House Is Purely An Individual Act." Other media covered the facts of the organ harvests from different angles.

In the evening, Wang Wenyi was interviewed by well-known host Todd Feinburg, broadcast live at WRKO Radio Station. Wang Wenyi said that the CCP is hastily performing organ harvests from living people across China. She hoped that the medical circle can pay attention to these inhuman crimes, and called on the world's media to take immediate action to investigate the incidents of organ harvests from living people.

The host was moved by Wang Wenyi's sincerity. After the program, he continued his conversation with Ms. Wang for over 20 minutes. He asked about the current situation of human rights in China and the political future of the CCP. He encouraged Wang Wenyi not to be discouraged, and to continue contacting the media to make the CCP's persecution of Falun Gong known to the world.