In 1996, Malaysia is fortunate to hear about Falun Dafa

Falun Dafa was first introduced to the Chinese public in 1992, and was soon embraced by people all over China. Four years later, the Malaysian people learned about Falun Dafa through a well known chain bookstore, from visits to practice sites in Mainland China, and from copies of Zhuan Falun sent by overseas relatives and friends. Falun Gong practitioners showed tremendous physical and mental benefits. They in turn helped more people with predestined relationships to learn about Dafa. Some practitioners began to do the exercises at the Forest Bureau Park in Kepong.

After the first Falun Gong practice site was established, Falun Dafa soon spread throughout Malaysia, through bookstores, practice sites and by word of mouth. Malaysia now has 65 practice sites.

From 1996 until 1999 when the Chinese Communist Party (CCP) started persecuting Falun Gong, there were only a few practice sites and group Fa-study sites in Malaysia. Most practitioners practiced the exercises at home. Even more practitioners only did the exercises and didn't study the Fa and had therefore an unclear understanding of Falun Dafa.

On April 25, 1999, 10,000 Falun Gong practitioners peacefully appealed near Zhongnanhai in Beijing. Many Malaysians witnessed through media reports the rapid dissemination of Falun Gong in China. More than 70 million people in China had learned Falun Gong within seven years. The number of Dafa books sold in Malaysian bookstores during that time skyrocketed.

On July 20, 1999, the CCP and Jiang Zemin group started persecuting Falun Gong. The Malaysian media printed and broadcast slanderous lies churned out by CCP media. Many people who didn't know Falun Dafa well enough believed these lies. Scores of people gave up Dafa practice after they saw that the CCP banned the practice. Only a small percentage of Dafa practitioners who read Zhuan Falun, who truly understood the magnificence of Dafa, saw through the CCP's schemes. They persisted in Fa study and the practice amidst the earth-blanketing propaganda.

At first, many practitioners in Malaysia didn't know how to clarify the truth; they only knew that Falun Dafa is good and that they physically and mentally benefited from Dafa. So they clarified the truth through the simplest of means--doing the exercises in public. They came out of remote residential parks and went to popular public parks to do the exercises, so more people could see with their own eyes and understand what kind of practice Falun Gong is.

Despite difficult circumstances, Malaysian practitioners constantly cultivated themselves by reading Teacher's books, Zhuan Falun, Essentials for Further Advancement and other lectures and articles. They tried to always conduct themselves according to Truth, Compassion,Tolerance. They organized Fa-study sites, Fa-study camps and Fa conferences, so that Dafa practitioners would have an environment to study the Fa, share their experiences and help each other.

In May 2003, Malaysian practitioners held national Fa-study and experience sharing camps as they celebrated World Falun Dafa Day, so that new and veteran practitioners would understand the importance of the three things, Fa study, sending forth righteous thoughts and clarifying the truth.

On November 23, 2003, the first Falun Dafa experience sharing conference in Malaysia was successfully held in the capital city of Kuala Lumpur.

On November 6, 2005, the Falun Dafa Cultivation Experience Sharing Conference of Asia-Pacific was held in Malaysia. About 1,200 Falun Gong practitioners from 11 countries and regions including Singapore, Indonesia, Thailand, the Philippines, Taiwan, Hong Kong, Japan, Korea, Australia, and India attended the conference held at the Istana Hotel. This was the first Falun Dafa experience-sharing conference of the Asia-Pacific region held in Malaysia. The goal was to make it possible for local practitioners share their experiences with practitioners from other regions.

Perseverance amid difficulties: clarifying the truth through various channels

On August 18 and August 19, 2001, Jiang group's propaganda mouthpiece and other media outlets misled the Malaysian media with reports about the Tiananmen self-immolation incident. The media issued false reports without knowing the truth. Three days later, Malaysian practitioners held a press conference with the theme, "Falun Gong has nothing to do with the Tiananmen Self-immolation" at Capital Hotel in Kuala Lumpur, and for the first time thoroughly clarified the truth about Falun Gong to the public.

Reporters from AP, Oriental Sun, a major Chinese and English newspaper in Malaysia, and the Nanyang Evening News attended this press conference. The practitioners made a truth clarification breakthrough, which boosted the practitioners' confidence. NTV7 (Malaysia) reported the press conference during its 9:00 p.m. news programs on August 22, clearly pointing out that the Tiananmen self-immolation had nothing to do with Falun Gong.

Aside from distributing flyers and clarifying the truth, Malaysian practitioners also actively participated in community events to help more people learn the truth about Falun Gong.

With their kindness and peacefulness, Falun Gong practitioners in Sandakan, Sabah, Malaysia won the respect of local officials who invited the practitioners to participate in the International Challenge Day parade on May 28, 2003. About 600 practitioners from various parts of Sabah and some supporters took part in this activity, sponsored by the Sandakan City Council.

On January 4, 2004, Ipoh City, Perak State held a parade with the theme, "Bougainvillea," which is the official city flower of Ipoh. Upon hearing the introduction of Falun Dafa by practitioners, the person in charge of the parade dispatched staff to our practice site to learn more about Falun Dafa. After this inquiry, he accepted practitioners' application to participate in the parade. The Falun Gong practitioners' procession was the only group displaying traditional Chinese culture. Many Ipoh Chinese residents were excited to see the practitioners' float, the heavenly maidens and the "Falun Dafa is Good" banner.

On the August 31, 2004 National Day, Falun Gong practitioners in Sandakan, Sabah were invited by the local government to participate in the parade. Their group received respect from the police and cheers from the audience, and they were praised when they approached the platform. The host announced, "Falun Gong (Falun Dafa) advocates Truth, Compassion, Tolerance and tries to make everyone a good person and a good citizen."

(3) Clarifying the truth to the precious Chinese people

Malaysia is in the tropical region. Although it's a small country, it is a tourist hotspot in Southeast Asia. Aside from clarifying the truth to the locals, Malaysian practitioners also clarified the truth to visiting Chinese people. Since 2001, practitioners started to clarify the truth to Chinese tourists at tourist attractions.

From passive to active: Malaysian practitioners' path of Fa rectification after 2004

In the first few years of the persecution, Malaysian practitioners were passive. After 2004, the situation started to change and the practitioners matured through tempering. They did better and better in clarifying the truth and fully exposed the persecution and suppressed the evil.

Clarifying the truth to the deceived local media

Since the persecution began, Chinese and English newspapers in Malaysia were pressured and deceived by the CCP. They published large numbers of reports that slandered Dafa and twisted the truth about the practitioners' various Dafa-validating activities. The Malaysian public didn't know the truth and believed the lies. Later, the practitioners realized that they should not skirt the issue but instead clarify the truth wherever the problem arose. They exposed the evil persecution directly by revealing the issue of the CCP exporting lies to the local media.

Malaysian practitioners overcame numerous barriers and held press conferences in July 2004 and November 2004, during which they clarified their standpoint and goals for truth clarification to the media and the public. Major Chinese media inside and outside China attended the press conference and learned the truth about the CCP's persecution of Falun Gong. Malaysian practitioners soon after cast aside previously held qualms about holding press conferences and frequently invited the media to report on Dafa activities. The number of slanderous media reports against Dafa decreased, and many media outlets published reports on the practitioners' truth clarification activities.

Suffocating the evil with a lawsuit

The media starts to publish positive reports on Falun Gong 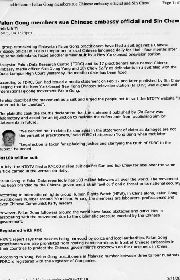 In early 2004, a Chinese newspaper published a slanderous report issued by the Chinese consulate. The local practitioners filed a lawsuit against the Chinese consulate, charging them with libel. The practitioners told the Malaysian public that Falun Dafa is being persecuted, and that all of the vicious CCP defamatory articles were false. The practitioners clarified the truth to people with great compassion and great tolerance, in a peaceful and rational manner, so that these evil lies would not twist people's minds. After the lawsuit was delivered to court, the situation was completely reversed. The Chinese consulate no longer dared to instigate the local government and newspapers to publicly slander Dafa, and the slanderous reports disappeared.

“Warden at the Huairou Detention Center Threatened to Send Me to Northwest China, Never to Come Back Again”