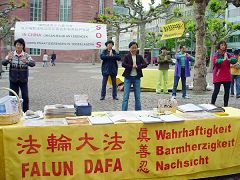 The bright big golden banner inscribed with the words, "Falun Dafa: Truthfulness- Compassion-Forbearance" in red flied high in the sky over the square. A pot of yellow roses in full bloom and beautiful, pure paper lotus flowers decorated the information desk with joy. Around the square hung the banners reading, "Nine Commentaries exposed the evil nature of the Chinese Communist Party," "SOS: Strongly Condemn the Chinese Communist Party Concentration Camps Taking Organs from Live Falun Gong Practitioners for Profits and Burning the Corpses to Destroy the Evidence," and "STOP the Persecution of Falun Gong." These banners expressed Falun Gong practitioners' heartfelt wishes of peacefully protesting against persecution and rescuing the people in the world.

Different from usual, there were a lot of Chinese tourists here today. In fact they came to participate in this celebration! The buses full of tourists parked by the square. The precious Chinese people saw "Falun Gong" once they got off the buses. Showered in the auspicious field illuminated by Buddha's light, many people looked joyful. They came over to take a look at the photos about the truth and accepted the Nine Commentaries on the Communist Party and the materials about the truth of Dafa. The busy Germen people were attracted by the beautiful demonstration of exercises and stopped their steps. Some came to find out the truth, some signed their names on the petition, "Calling upon German Premier to Request the Chinese Government to Stop Taking Organs from Live Falun Gong Practitioners for Sale."

Today is also the first anniversary of a practitioner obtaining the Fa. This practitioner said that she once passed by Master on the street in Beijing many years ago. Master left a word, "You should be attached to Buddha!" At that time she did not pay attention and did not know Master, and heard the word "Buddha" for the first time. Later she converted to a Buddhist approach. However Master did not give her up. She felt that Master expelled her name from hell and she moved up from one level to another, toward the more beautiful world. In a seemingly accidental occasion she accepted Dafa. She felt deeply the beauty of Dafa and urgently hoped her relatives would learn Falun Dafa and start practicing cultivation. In the process of telling the facts of the persecution to her relatives, she realized how difficult it has been for Master to spread the Fa and save people. It was just as the verse "Suffering to Save" says,

"Steering the Fa Vessel before disaster descends,
Millions upon millions
the hardships and perils, blocking my path,
Carrying the Cosmos, boat broken and torn,
At last! I pull into shore--

We felt the same while recalling how we obtained the Fa. In this day of jubilation, we were grateful for Master's profound grace. We have to be brave and diligent while striving forward and walk well on the last leg of our path of returning home.