On the afternoon of May 20, 2006, one of the largest parades in the Eastern US - the Strawberry Festival Grand Feature Parade, was held in Buckhannon, West Virginia. First-class bands and performance groups from across America were especially invited to participate in the celebration activities. The Falun Gong entry was invited as the only Asian group, and received five awards from the parade.

The West Virginia Strawberry Festival started in 1936, and there have been 65 celebrations since then, with only one cancellation during WWII. This unique traditional festival in West Virginia has developed into one of the hundred best celebrations and parades in the US. Each year, it attracts first-class marching bands, high school bands, high-ranking officials, vendors and handicraftsman to come to perform or view and emulate crafts from America and other countries. The Strawberry Festival organizing committee spends a year planning and organizing the annual celebration activities, and selecting entries for the parade. Since 1980, more than 100,000 bands and other performing groups from 36 states in the US, District of Columbia, Canada and Mexico have participated in the West Virginia Strawberry Festival Grand Feature Parade. 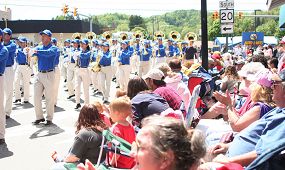 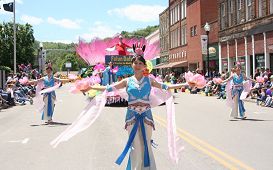 Saturday's celebration parade brought the one-week Strawberry Festival celebration activities to a climax. Several tens of thousands of tourists from out of town and local residents together watched the parade on both sides of the streets. Of more than a hundred parade entries, the Falun Gong entry, composed of about 300 practitioners, was the largest. The Divine Land Marching Band that has recently made appearances in large-scale parades in Manhattan, New York, Washington, DC and other places led the Falun Gong parade entry. They performed several vigorous and powerful musical pieces, resonating with the mostly American audience. 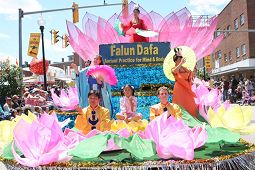 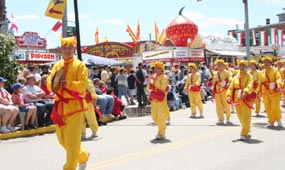 Closely following the marching band was the lotus flower float. A huge pink lotus flower blossomed on top of the float, with layers of huge lotus petals made of transparent pink gauze, and three golden words, "Truthfulness-Compassion-Forbearance" in both Chinese and English embroidered on green lotus leaves. Each level of the three-layer float was embellished with pink lotus flowers, set off by yellow flowers and green leaves. In flower clusters at the head of the float, one Western and two Eastern Falun Gong practitioners of different ages were demonstrating the sitting meditation exercise. Four women practitioners holding lotus flowers danced elegantly in front of the float. Five women practitioners in Tang Dynasty costumes waved to greet spectators, accompanied by beautiful music. The float created a peaceful, harmonious and wonderful picture. 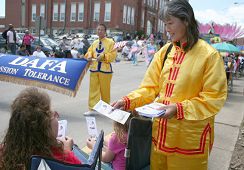 At the end of the Falun Gong entry was the waist drum troupe composed of 70 practitioners. Many West Virginia residents saw the Chinese waist drum performance for the first time, and repeatedly expressed their admiration.

During the more than one-hour parade, wherever Falun Gong practitioners approached, there would be rounds of applause and cheers. People happily took informational materials from the practitioners.

2006 West Virginia Strawberry Festival organizing committee chairman Stephen Benson said that last year, the committee watched California's Hollywood Christmas Grand Parade on TV, and they appreciated the Falun Gong entry in the parade. After that, they especially made a phone call to the Falun Gong practitioners' marching band, waist drum troupe, and float to invite them to participate in this year's Strawberry Grand Feature Parade. Benson said that the judges all thought that the Falun Gong entry performed perfectly.

Falun Gong practitioner Ms. Ge Min said that the practitioners not only shared China's unique traditional culture with American people, most important is that they bring Falun Dafa's wonderfulness to the people here. Falun Gong practitioners' peaceful demeanor displayed in the parade left a deep impression on the organizers, and won praise from the local people.

With Falun Gong practitioners gradually melting into the free, multi-cultural society of the US in recent years, more and more people have gained a deeper understanding of Falun Gong's teaching of "Truthfulness-Compassion-Forbearance."