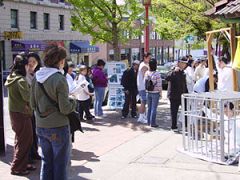 On May 13 fourteen years ago, Master Li started to introduce Falun Dafa to the public. In the past fourteen years, Falun Dafa has been spread to over 70 countries and regions and into over a hundred million people's lives. In order to celebrate this special day, practitioners from the greater Seattle area held a series of events.

In a park at Chinatown starting from 11 a.m., practitioners demonstrated the five sets of exercises and taught them to people. They explained how the slow and elegant movements and the guiding principle of "Truthfulness-Compassion-Forbearance" help people balance and improve their health physically and mentally.

Practitioners also set up the photo exhibition of "The Journey of Falun Dafa" there, displaying how Falun Dafa was introduced to the public in 1992 and quickly spread all over the world. The practice is gaining popularity across the world even after being persecuted by the Chinese Communist Party (CCP) since 1999. Many historical moments were shown in the photos.

In the recent couple of months, it has been reported that labor camps and hospitals in China have colluded to harvest organs from living practitioners and sold them for huge profits. In order to help more people know about the atrocity and call for the international community's close attention and thorough investigation of the CCP's genocide against Falun Gong practitioners, local practitioners held reenactments of the organ harvesting and anti-torture exhibitions, as well as a picture exhibition to expose the evil history of the CCP. Besides the posters, the practitioners also introduced the Nine Commentaries on the Communist Party through loudspeakers in both Chinese and English, the current progress of over ten million withdrawals from the CCP and its affiliated organizations, and the fact that CCP secretly held practitioners for organ harvesting.

Practitioner Alex read the congratulatory letter on World Falun Dafa Day from the governor of Washington State. In the letter, Governor Christine Gregoire said: "As the Governor of the State of Washington, I'm pleased to welcome all the people who celebrate 'World Falun Dafa Day'." She expressed that it is especially important to advocate 'Compassion" and promote diversity.

Upon seeing these shocking displays, some passersby came over to ask what was going on. After learning the facts, many people signed the petition letter and asked what else they could do to help.

Alice Malhan, 14 years old from Eckstein High School, said that she felt so bad when she learned that such terrible things were happening in China. A young mother named Christine was shocked by the crimes and expressed her outrage.

It was very busy in Chinatown on that day, as many high school students came to Chinatown for Oriental Culture offsite classes. Mohammad Khalili of Bothel said, "It is very good to have this kind of event in Chinatown. It was very educational. It is very important to raise people's awareness through these events."

“We Should Believe in Dafa and Teacher Unconditionally”