(Clearwisdom.net) Heerlen city is located in the south border area of Holland, in the suburbs. Two local practitioners invited fellow practitioners to join their celebration of World Falun Dafa Day on the 13th of May and to help tell local people about Falun Dafa. Many people asked about the practice and at the same time they heard how the communist regime is persecuting Falun Gong in China. 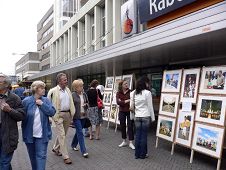 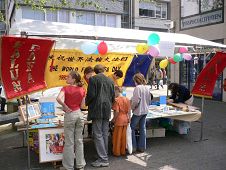 The 13th May 2006 was the seventh World Falun Dafa Day and the fourteenth year since the practice was introduced to the public. A set of photo display boards detailed the remarkable history of Falun Dafa and the mercy and compassion of Master Li Hongzhi, the founder of Falun Dafa. People who saw these photos could feel the beauty of Falun Gong. The pictures also exposed the uncompromising courage of Falun Gong practitioners in the face of seven years of persecution in China.

The practitioners spoke to an English teacher who just came back from five months work experience in China. She appeared three times in the afternoon in our event. She took material, read the posters and talked to our practitioners. In the end she said: "I must learn Falun Gong."

“Resident of Victoria, Spain: "This Is the Most Significant Day in My Life" (Photos)”