Resident of Victoria, Spain: "This Is the Most Significant Day in My Life" (Photos) 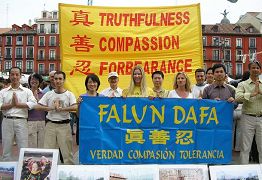 (Clearwisdom.net) On May 13, 2006, World Falun Dafa Day, practitioners from Madrid went to Victoria, an ancient city in Spain, to help more people know about Falun Gong. A Victoria resident told the practitioners: "This day is the most significant day in my life, because I found out about Falun Gong. When I knew that Truthfulness, Compassion and Forbearance are the principles of Falun Gong, I was so excited. I knew this was the truth I have been looking for all my life."

On the joyful day when Heaven and Earth together celebrate the fourteenth anniversary of Falun Gong's public introduction, more than ten thousand Victoria citizens had the good fortune to learn about Falun Gong's goodness and join the world in calling for an end to the brutal persecution of the practice.

May the 13th happened to be a big public holiday in Victoria. The sun was shining; people wore their best clothes and gathered in the square in front of the city hall in the city centre to join the holiday's pageantry. Falun Gong practitioners set up a stand near the biggest entrance to the square. When entering the square, people's first sight was a picture exhibition detailing Falun Gong's spread around the world with pictures of practitioners demonstrating the beautiful, slow and relaxed five sets of Falun Gong exercises.

People are shocked at the CCP's atrocities


On the opposite side of the square were pictures exposing how Falun Gong practitioners have persevered with peaceful resistance while being cruelly persecuted for seven years. Nearby was the peaceful and beautiful exercise demonstration. The strong contrast immediately attracted people's attention. Many people asked for leaflets and Video-CDs. Also some people were hurrying to attend the pageantry when they received the material. They read it while walking, and when they understood the truth, they turned back to sign the petition to support Falun Gong. Some people learned the five sets of the exercises on the spot.