(Clearwisdom.net) May 13, 2006 was the seventh anniversary of World Falun Dafa Day. On May 14, Falun Gong practitioners from France gathered together at the Human Rights Square in front of the Eiffel Tower, and celebrated Master Li's fifty-fifth birthday as well as the fourteenth anniversary since Falun Gong was introduced to the public. By playing music, dancing, drumming and demonstrating the five sets of Falun Gong exercises, practitioners showed people the beauty of "Truthfulness, Compassion & Forbearance". 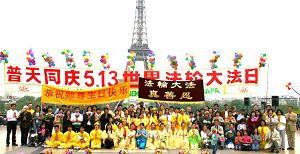 A large banner made by Falun Gong practitioners showed the words "Everybody Celebrates Falun Dafa Day Together" in Chinese and French with the pictures of two blossoming lotus flowers. These attracted lots of tourist's attention from far away. Balloons with the words "Falun Gong is Great" printed on them were tied on top of the banner and the richness of the colors was very pleasing to the eye.

A practitioner named Alexis first introduced the meaning of May 13 to the audience, saying that this is an important and special day. He said that it has been fourteen years since Master Li first introduced Falun Gong to the public, and now it is widely practiced in more than eighty countries around the world; people from different countries and ethnic origins are all enjoying the benefit of Falun Gong and celebrating Falun Dafa Day together. He also wished Master a Happy Birthday on behalf of all the Falun Gong practitioners from France.

The lotus flower symbolizes purity and beauty because of its ability to maintain its purity despite growing up from dirty muddy water. In the square decorated by lotus flowers and baskets of flowers, Falun Gong practitioners, wearing yellow outfits and carrying their red drums, played traditional Chinese waist drums performances. The performance won them rounds of applause from the audience. Then the dancing team composed of Falun Gong practitioners performed four dances "Heavenly Ladies Spreading Flowers", "Lotus Flower" "Fan Dance" and "Missing our Home Country", the dance movements were elegant and graceful, showing traditional Chinese culture to the audience and, at the same time, spreading the beauty of Falun Gong to the world.

Practitioners from Germany performed four songs: "Plum blossom in Snow", "Renewal of the World", "Predestined Relationship with Master and the Fa", and "Walking the Path Together Holding Hands". The songs reverberated through the air and touched everyone's hearts. The peaceful demonstration of Falun Gong exercises with the calming music, together with the explanation of the exercises, managed to attract everyone's attention. Many people used their camera or camcorder to capture the wonderful moment.

Many children came to ask for paper lotus flowers and some of them were trying to learn to make them themselves. There were many children with the "Falun Dafa Is Great" balloons in the square; they were all very happy and their smiles were just like the blossoming lotus flowers. The calligraphy done by Falun Gong practitioners brought to the audience the principles of Truthfulness, Compassion and Forbearance.

Many people also stopped and looked at the display board showing the spreading of Falun Gong around the world and the persecution of Falun Gong by the Chinese Communist Party. They expressed their shock and anger that such a peaceful and wonderful practice could be persecuted so brutally. They were especially shocked by the atrocity committed by the CCP in harvesting internal organs from live Falun Gong practitioners in concentration camps. Many people expressed their support for Falun Gong practitioners, and condemned this brutal persecution.