(Clearwisdom.net) On May 14, 2006, Falun Gong practitioners held a Falun Dafa Cultivation Experience Sharing Conference at the Cougar Den Room at the University Center, University of Houston. Practitioners from Houston and Austin, Texas attended the conference. 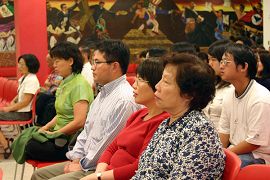 Mrs. Chen, a Falun Gong practitioner from Houston, said in her sharing, "When doing Dafa work, I have a better understanding of the relationship between cultivation and Dafa work that Master has taught us. No matter what we do, if we just treat it as a job, then it is just a job, and we can only finish it in a human way. But if we treat whatever we do as cultivation and validating the Fa, and keep the Fa in our minds, then we can finish the job supernormally. When doing the Dafa work, we will encounter tests, and we need to cooperate with fellow practitioners well. Fellow practitioners have pointed it out to me that I always try to finish everything by myself, and on the email list, I am the most active one, so it is very possible that I have taken away the opportunities for other practitioners to validate the Fa and to establish their mighty virtue. It is damaging to the whole group. I thank fellow practitioners for pointing this out to me."

Mr. Pan, a practitioner from Austin, said, "I thought I had cultivated well, because I am kind to people. Other fellow practitioners also thought so. But actually, it is not true. When fellow practitioners gave their suggestions and ideas, I agreed with them at the surface level, but in my heart, I was still attached to my own ideas. I am active in doing Dafa work, but I only wanted to do big projects, because the big projects allow me to gain prestige and others will think that I am great. I found that these are all attachments and I need to eliminate them."

Mrs. Hong from Mexico Bay talked about how she stepped out from personal cultivation to validate the Fa. She said, "Before I practiced Falun Dafa, I had insomnia and constipation. Since practicing Falun Gong healed my diseases, I began to believe in qigong. Before the persecution, I practiced at home. I didn't know that the CCP launched the persecution. A fellow practitioner told me to step forward to validate the Fa, but I had some other thoughts about stepping forward. Later, from the websites, I learned about the persecution in China, so I decided to step forward and attend the truth-clarifying activities. My husband tried to stop me. He said, 'Why do you have to go out? Just practice at home.' He also didn't want me to buy Falun Gong T-shirts. I clarified the truth to him. Later, he became supportive and helped me to pass out materials. He always wears a T-shirt, which clarifies the truth."

Mrs. Ting Yu from Houston said, "I obtained the Fa one year ago. I had a near-death-experience before cultivation, so I thought that since I did not die, maybe gods will give me some missions. After practicing, the fears that I had had for years were gone. Sometimes, I had conflicts with my husband about educating our children. I used to think, how can I be so servile to my husband? But later, I tried to follow the principle of 'Truthfulness, Compassion, Forbearance' and found that I didn't do well. I realized that others will obtain the Fa only if I follow the principle of 'Truthfulness, Compassion, Forbearance'. So I apologized to my husband sincerely, and later my husband also started to cultivate."

Mr. Huai from Huston said, "I obtained the Fa in 1996. Before practicing, I had high blood pressure, and only one month after I started practicing I no longer needed to take medicine. When I went to the physical examination, doctors found that my blood pressure was normal. One year later, I suddenly felt very uncomfortable. My body temperature was above 100 degrees. My wife put cold towels on me. I read Zhuan Falun, and asked Master for help. My temperature went down before midnight. I told my co-workers the next day about this. They were all amazed. Later, somebody asked me to try some other qigong, so I stopped practicing Falun Gong for two months. My diseases came back, and I developed a disease in my nose. I could only breathe through my mouth and felt very uncomfortable. I went to the hospital and had a surgery, which cost me 10 thousand yuan. It was a serious lesson to me, so I resumed cultivation. I realized that Dafa is amazing, and it is very important to believe in Master and the Fa.

Western practitioner Fred from Houston said, "I didn't know what to do when I saw others' shortcomings in cultivation. But later, I realized that I need to be on the Fa at every moment. I should follow the principle of "Truthfulness, Compassion, Forbearance" and kindly point out the shortcomings. Also I should look inward when seeing others' shortcomings."

Practitioners from Houston, Lisa, Kitty and Sunny talked about the importance of the media work and the role that media plays in clarifying the truth. They gave suggestions for future work.

Tony, from Austin, said, "Everybody's cultivation path is different. Sometimes, I felt that my path was very narrow, and I could not overcome the conflicts with others, which were everywhere. Later, I realized that I need to consider others first when having conflicts. If I put down my selfishness, the conflicts will disappear."

Young practitioner Eugene shared his experience. He is a veteran practitioner, although he is only six now. He said, "I am six and I have cultivated for two and a half years. I keep reading the Fa, sending forth righteous thoughts and clarifying the truth. The first things I do after school every day are read the Fa, send forth righteous thoughts and clarify the truth. I read 15-20 pages of Zhuan Falun before I go to play. On holidays and weekends, I read one chapter a day. I have read Zhuan Falun 28 times so far. Once, a kid kicked me at school, but I didn't kick him back. So Master came to me and asked me to do one set of exercise. I did it well, so I gained a pair of wings. Master praised me and I flew up. Since I didn't kick the kid back, I flew up pretty high. One time, I had fever and pains in my ears and teeth. I didn't take drugs and I sent forth righteous thoughts. I was thinking, "When it's difficult to endure, you can endure it. When it's impossible to do, you can do it," (Zhuan Falun) and repeated "Falun Dafa is good," and "Truthfulness, Compassion, Forbearance are good," and the pains disappeared.

The young practitioners go to Minghui School on weekends. "Truthfulness, Compassion, Forbearance" are rooted in their hearts and they know that they need to be good.

Representing the "Chinatown Truth-Clarifying Team," Mr. Li shared the experience of clarifying the truth during the past three years. He said, "Falun Gong practitioners made friends with the store owners in Chinatown. A manager in Chinatown always says, "You have mighty virtue," whenever she runs into practitioners.

The conference started at 9:00 a.m. and ended at 5:30 p.m. Twenty-four practitioners shared their experiences. Everyone realized the importance of sharing, looking inward, eliminating one's fundamental attachments, and doing well the three things. Practitioners shared their experience with pure hearts. Everyone saw his own shortcomings and benefited from this conference. The conference ended successfully at 5:30 p.m.