Practitioners in Changchun City recall the days when Teacher spread Dafa in his hometown. They remember the fourteenth anniversary of Teacher spreading Falun Dafa with the deepest feelings in their hearts.

Teacher used to live on the northwest corner of the intersection of Jianshe Street and Jiefang Avenue. It was an old building, and Teacher lived in an apartment facing south on the 4th floor (Picture 1). The apartment has two rooms and was less than 300 square feet. The inside room held a bed and closet, while the outside room held a desk, sofa, and bookcase. On the bookcase was an incense burner, half filled with incense ash. Teacher wrote his first books in this tiny apartment -- Falun Gong, Falun Gong (Revised Edition), Zhuan Falun, Zhuan Falun (Volume II), and Explaining the Content of Falun Dafa. Also in this tiny apartment, Teacher sat in meditation and dealt with demons that interfered with the Fa-rectification for over ten days at any one time. He did not even have time to shave. 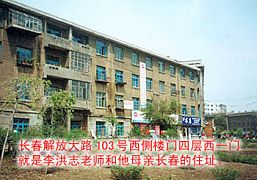 Once, Teacher sat for seven days and seven nights without eating or sleeping. His daughter reminded him to eat, worrying about him. Teacher sighed and told his daughter that about a dozen years had passed by in another dimension, while she was uttering the words. After that, his daughter never interfered with her father. Veteran practitioners understood what Teacher was doing. Just as Teacher said,

"I have to take care of a lot of things this time while I'm back in town. The students all know this, so they do their best not to disturb me. One ring of the phone might really disrupt what I'm doing, and so a lot of students don't even call me--I know that." (Explaining the Content of Falun Dafa)

When Teacher participated in the Oriental Health Expo in Beijing, the building in which Teacher resided was on fire. When someone told Teacher about it, Teacher put his right hand behind his head, made a beautiful gesture and said, "Let the fire be." After the firefighters extinguished the fire, they found Teacher's apartment was the only one the fire did not touch. People said that because the family cultivates Buddha and have Buddha images, their home was protected. Looking back at the incident, practitioners realized that it was the interference from the old forces. Like Teacher said,

"I am a person who dislikes fighting with others, and neither was it worth a fight with him. Whenever he brought some bad things upon me, I would just clear them up. Afterwards, I would resume my lecturing." (Zhuan Falun)

Changchun City Culture Square is in the east and not far away from Teacher's apartment. The square is the biggest place for rallies in the city. Before Teacher spread Falun Dafa, he used to do exercises there. (Picture 3) It is said that when the square was rebuilt, the original plan was to remove everything and build from scratch. The plan was later modified, leaving the trees in the southeast and southwest corners intact -- that was the place where Teacher used to practice. Before July 20, 1999, over 10,000 practitioners practiced here as a group in the mornings. The grand scene, solemn atmosphere, and peaceful and compassionate energy field, displayed by the goodness of Falun Dafa, attracted many people with predestined relationships, who also began practice Dafa. (Picture 4) 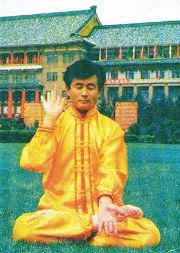 North of the Culture Square is the No. 5 High School. The first and second lecture series of Teacher spreading Dafa were held in a classroom there. The first lecture series was held on May 15, 1992, with about 180 students in attendance. Since then, Falun Dafa spread throughout China in a short seven years. By 1999, over 100 million people practiced Falun Gong in China. Within 14 years, Falun Dafa spread to about 80 countries, and almost everyone in the world had heard about Falun Gong.

When Teacher began to impart Falun Dafa, he used the form of "qigong." He opened acupuncture points and third eyes for practitioners, and cleaned up their bodies himself. Once a girl of about 16 years cried out loud continuously, as she was under spirit possession. Several other qigong masters patted her head and tried to stop her from crying, but they couldn't. Teacher stepped down from the lecture platform and patted her on her head three times, after which she stopped crying immediately. Everyone in the room was shocked. Before realizing what had occurred they applauded in admiration. Teacher also put energy mechanisms at the four corners of the classroom, which radiated red light in another dimension. The whole room was filled with peaceful energy.

After the second lecture series, Teacher toured the entire city on his old bike, cleaning up the field for Changchun City. He told practitioners to practice well and not to worry about anything.

Triumph Park is another place where Teacher practiced. In the extremely cold wintertime in Northeast China, he practiced without his coat and gloves for hours at a time. During one summer, it began to rain hard during practice. Everyone except for Teacher stopped and went to covered areas. Passersby all said, "Now that's a true cultivator!" Another time, a practitioner saw Teacher holding the wheel in the evening. When the practitioner returned the next morning, Teacher was still there practicing. Teacher was practicing throughout the entire night.

When Teacher first began to teach Falun Gong exercises in Triumph Park, he used the form of qigong to teach Dafa. He healed people's illnesses, freed people of spirit possession and straightened hunchbacks with one touch of his hand. Later on, two practice sites were established - one near the front and the other at the back gate of the park. The back gate was mentioned in Zhuan Falun:

"One morning when I was passing the rear entrance of Triumph Park in Changchun, three people came out of the rear entrance, shouting loudly. One of them said: "What sort of qigong is it that's practiced in which one can't even eat meat? I'd rather give up ten years of my life to eat meat!" What a strong desire that is!"

When some veteran practitioners read this section, they can almost see Teacher's image of those early years.

To the northeast of Triumph Park is the city's Grain and Oil Supply Company, where Teacher used to work. Every former colleague knows that Teacher was a kind, simple and sincere person. He was quiet and smiled all the time, and everyone liked him. When they asked Teacher to treat their illness, Teacher always helped them become better. On holidays, Teacher asked his former colleagues from the army to perform music and art shows for the employees in the Grain and Oil Supply Company. Teacher played the trumpet. In his work and life, Teacher showed us how to cultivate among people in a way that conforms to today's society and people as much as possible. Teacher mentioned about his cultivation while working there:

"When I used to go to work, the cafeteria in the workplace always lost money and was later shut down. After it closed down, everyone brought lunch to work. It was troublesome and a lot of hustle to make meals in the morning. Sometimes, I would buy two steamed buns and a piece of tofu in soy sauce. In theory, that should be quite a light meal, but eating that all the time was still not good, as the attachment had to be removed. As soon as I saw tofu again, it would make me feel sick. I could not eat it when I tried it again, lest I develop the attachment." (Zhuan Falun)

Many people in Changchun City used to be Teacher's colleagues, classmates, neighbors and relatives or friends. These are all predestined relationships Teacher had arranged, so they would be saved. We hope they could all realize the goodness of Falun Dafa and do not let Teacher's efforts come to naught. In "Dafa Disciple's Righteous Thoughts Are Powerful," Teacher said, "Dafa is spreading widely, saving all sentient beings." Teacher has given every sentient being many opportunities to be saved and it is up to every one to choose their future.

West of Triumph Park is a club of the Air Force, where Teacher held his third lecture series. At the time, a patient who was paralyzed after being hit by a bag of rice attended the lectures. She was given many treatments, and none was successful. Her family members brought her in on a stretcher. Several other patients from that hospital came also to the lecture. Before the lecture began, Teacher cleaned her body himself. He patted her body in the front and back before asking her to sit up, and she then sat up. Teacher then asked her to stand up, and she did. Teacher then asked her to walk around the lecture platform, and she indeed walked around! Her family members and other patients were all filled with gratitude. All of her family members began to practice Falun Gong after that.

On the first day of the lecture, Teacher arrived on his old bike with his daughter. When he saw a row of bikes had fallen down, he pulled all of them back up. There was a light rain while he did this. He was a role model for practitioners, even in small things. "He is full of great aspirations while minding minor details." ("Sage," Essentials for Further Advancement) At the time, a practitioner was waiting for Teacher at the door, planning to ask him to treat her family members' diseases. After seeing this, the practitioner was moved, inspired, and regretful: Teacher is thinking of others, how could I occupy his time by asking him to treat my family members' illnesses. She quietly returned to the auditorium and waited for the lecture to begin. Teacher's pure compassion resolved everything unrighteous and changed people's hearts.

The Provincial Committee Auditorium is across the street from Triumph Park. Teacher held his fourth and fifth lecture series there. During the fourth lecture series, Teacher asked several practitioners to stand on the podium. One of them had a big tumor in her belly. When Teacher cleaned up her body, blood and pus run down her pants -- the tumor was destroyed and the bulge on her belly disappeared. So many practitioners have witnessed the miracles. 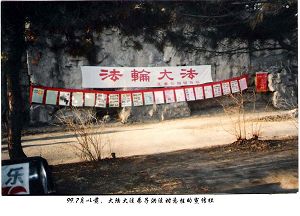 The next two lecture series were held in an auditorium (Mingfanggong) at Jilin University. It has been fourteen years since then, and many of the older buildings in the university have been torn down and rebuilt, yet the old Japanese-styled auditorium is still there as the witness and record keeper of history. This is telling us, "When the entire cosmos is coming to its end, our great Teacher came to spread Falun Dafa and save sentient beings." Inside the auditorium, Teacher's loud and clear voice is still reverberating. Numerous pictures of Teacher and practitioners were taken at the front entrance. So many have witnessed the miracles of Dafa.

Some practitioners saw huge golden circles of light around Teacher in another dimension. Eight deities with armor and weapons guarded Teacher, with four of them on each side. This scene was solemn and sacred.

An old man who had suffered a stroke wanted to take a picture with Teacher while sitting on a chair and holding his walking stick. Teacher told him to discard the walking stick and the chair. He slowly stood up and threw away the walking stick, put his left foot forward, then the right foot, and finally walked around the square outside the front entrance. Everyone there was filled with awe and said, "Miraculous!" Later on, the old man's wife wrote Teacher a letter, indicating that she will practice Falun Gong diligently to repay Teacher's great help.

“Our Mother Came on This Day”

“May 13 -- an Eternal Holiday for Sentient Beings”