The celebration started at 10 a.m. at the Union Square of Manhattan, which was decorated with several banners lifted by balloons. The banners read "May 13 - World Falun Dafa Day", "Falun Dafa is Good", and "Truthfulness, Compassion and Tolerance" respectively. The square is one of the busiest areas in Manhattan.

Practitioners dressed up to celebrate the 14th anniversary of Falun Dafa's public introduction and the seventh World Falun Dafa Day with colorful programs. Many New Yorkers and tourists joined the practitioners' celebration with great interest.

At the beginning of the celebration, practitioners Yun and Levi gave an opening remark in Chinese and English respectively. The speech reviewed the spread of Falun Dafa since Master Li introduced the practice to the public in 1992: Today, Falun Gong is practiced in more than 80 countries and regions and teachings of Falun Dafa have been translated into more than 30 languages.

At the end of the speech, on behalf of practitioners from the greater New York area, Yun and Levi wished Master Li Happy Birthday and a happy "World Falun Dafa Day". They expressed thanks for Master's boundless compassion and arduous saving.

Falun Dafa transcends race, nationality, language and culture differences, and is being practiced in more than 80 countries and regions in 4 continents. Practitioners in succession went onstage to introduce Falun Dafa to the audience with their own native languages including Chinese, English, Russian, French, Spanish, Arabic and Hindi.

The practitioners then demonstrated the exercises. The graceful movements and the host's introduction attracted wide attention from passers-by.

Dafa practitioners celebrated this great day with music, song and dance. The Divine Land Marching Band started the celebration with "Falun Dafa is Good" and "Drumming of the Fa Shakes the Ten Directional Cosmos." Sopranos Min and Judy then sang "Assisting Master in Fa Rectification", "Awakening", "Be Saved" and "Compassionate Call" to express the practitioners' boundless appreciation to revered Mater's arduous saving and call on everyday people to cherish this precious Fa. Western practitioner Ben and Courtney sang several English songs to glorify Dafa's beauty and call on the public to stop the persecution in China.. Courtney composed a song to expose the CCP's atrocities of harvesting organs from living Falun Gong practitioners, which touched many peoples' hearts.

As described by the hosts, Falun Gong is deeply rooted in the Chinese culture of 5,000 years. Through performances such as the Fairy Flute and Fan Dance, practitioners presented the audience with the true Chinese folk culture and peoples' pursuit in searching for wisdom and enlightenment. The waist drum and traditional dragon and lion dances were also well received.

New York State representative Benjamin and his wife also joined the celebration. They were very happy to celebrate the holiday with practitioners and other New Yorkers. Knowing that Falun Gong is a very peaceful practice, Benjamin condemned the CCP's persecution of Falun Gong and supported the practitioners' freedom of belief and speech. 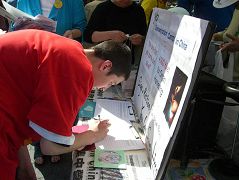 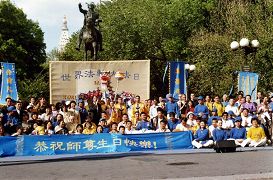 Towards the end of the day, the hosts once again introduced Falun Gong and the persecution to the audience and thanked everyone for their participation in the celebration.

In the end, the practitioners posed in front of the camera and said in harmony: "Master, Happy Birthday!"

“Macao: Letting Everyone Know That "Falun Dafa is Good" (Photos)”