Practitioners' Gratitude -- on May 13 (Photos)

One of the Oldest Falun Dafa Practitioners in Europe

"This is inconceivable! How can this be? This is unimaginable in medical science," said a doctor when he conducted a physical checkup, looking at this silver-haired solemn lady in front of him. "You do not have any of the common symptoms that senior citizens have. How do you keep so healthy?" "I practice Falun Gong," the elderly woman answered with pride. People in the room were all watching this rosy-cheeked, strong-voiced lady who seemed to be in her 70s. She is Hanna Jaeger, and she is 91, from Germany, among the oldest Falun Dafa practitioners in Europe. 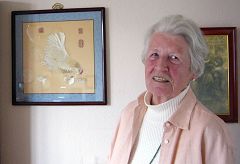 91-year-old Hanna at her home

In August 1999, Hanna finished reading Zhuan Falun without stopping, after it was recommended to her by a Chinese doctor. "I probably understood less than 20% of the content, but I knew that all of the words were the truth, and that it is the way to lead me home, which I had been seeking. I could not wait any longer, so I imitated the movements according to the illustrations in the book."

The afternoon sun shone through the off-white cotton curtains, casting light on the Persian carpet in front of the red wooden tea table and the sofa. There were several pink roses floating in a navy blue china plate that was filled with water.

Hanna was born in a Lutheran pastor's home. Although her strict father tried to nurture her to be a strictly self-disciplined, almost rigid girl, she could not help but shake her head when she could not understand the preaching in the church, no matter how grown-ups tried to explain things to her and scolded her. Before coming into contact with Falun Dafa, Hanna had lots of sickness. All her health problems were cured after cultivation except that her false teeth needed to be replaced - which lead to the doctor's checkup mentioned at the beginning of our story.

"At first I could not understand many of Master's teachings, but I never doubted it. I would understand his words after experiencing some events."

Once she was hurrying to a bus station. Suddenly her foot twisted, and she fell down on the stone-paved road straight as a stick; her head hit the paving stones very loudly. A young man heard the noise from inside his closed car, parked a hundred feet away. He opened the door and ran to her, but saw that Hanna had rolled over and gotten up on her own and dusted herself off, then quickly resumed walking. The young man stopped her and said, "Are you okay? Where are you going? Can I take you to a hospital?" Hanna replied, "I am fine. I need to catch the bus, and I do not need to go to the hospital." That young man insisted on taking her home, so she let him. She saw that her face was covered with dust, and there was some dried blood near her mouth. She washed her face, and then went out again. "Later I realized it was just a debt creditor seeking repayment, like Master described in Zhuan Falun. Otherwise how could I be fine at such an old age?"

With a Master taking care of her, a disciple is very fortunate. However, practitioners must be careful not to develop attachments, as these can cause trouble. Hannah explained, "Once at an event to clarify the truth, a fellow practitioner introduced her boyfriend to me. I tried to shake hands with him. He said, "I have the flu; I'd better not contaminate you." I answered loudly, "I am not afraid of flu because I cultivate Falun Gong." Then I shook his hand. The next day, I had flu symptoms, which lasted for one week. That was an unforgettable lesson for me."

Hanna was an elementary school teacher before she retired. Her favorite class was music. Cultivating Falun Dafa gave her incredible abilities. She learned the truth of the Chinese Communist Party (CCP)'s persecution of Falun Gong, and she is helping with the translation of Master's writings with her ability to speak four languages - English, German, French, and Italian. Hands that were familiar with piano keys are now moving a computer mouse. She used to do translations on paper then would ask others to input them into a computer. Later, Hanna learned how to establish a file on a computer, edit, save, and send it over the Internet through e-mail. When she was learning computer skills, Hanna took a whole week to remember one set of instructions because of her age.

Hanna has a full schedule every day. She studies the Fa, does the Falun Gong exercises, sends forth righteous thoughts, does Dafa truth-clarification work, goes shopping, visits friends and family, and entertains guests with chocolate and humor. Before, Hanna was not happy to see some of her guests, including her daughter Emma who is a cello player in an orchestra. They used to not get along and never visited each other, but now Hanna often visits her daughter and her grandchildren. Where did this change come from? "Family members are sentient beings. We should treat them just like anyone else, without any sentimentality. I no longer feel hurt or bitter in my heart," she said slowly.

"The Great Tao has No Form"

In 1992, Falun Dafa became rooted in people's hearts through word of mouth and from heart to heart, spreading in mainland China. After the persecution began in 1999, practitioners in China and overseas have called everywhere to clarify the truth to all circles of society. Many predestined people have begun the path of cultivation during this period, and they are validating Falun Dafa by upgrading themselves in their own environment.

Szilvia Akbar is a shy young lady from Hungary. She came to work in a northern Germany nursery school seven years ago. Recommended by a local Falun Dafa practitioner, she read one talk of Zhuan Falun every day. She knew about some supernormal capabilities before, such as the third eye, the existence of other realms, etc. She had tried other cultivation ways, but none of them had lasted long. What made her cultivate in Falun Dafa to today? "My mother asked me once why I cultivated Falun Dafa and how long I will cultivate with this method. I told her I will cultivate until I totally understand Falun Dafa. But I have not fully enlightened to the inner meanings of Falun Dafa, so I am still cultivating in it now."

Szilvia met with much interference when she first obtained the Fa. Her family members all said bad things about Falun Dafa, especially her mother, and they were strongly against it. "I could feel Master was strengthening me to enable me to not be interfered with. Under that pressure, the power of the Fa made me very solid. After a long while, my family saw the positive changes in me. My mother noticed I that I was more straightforward and honest. Szilvia said, "I did not just point out people's mistakes, but I also brought up good suggestions, listened to others whole-heartedly, and pointed out mistakes to others with humor. I can be sympathetic to my mother's troubles. Before, I had never thought that she would have difficulties. Maybe I never wanted to understand her, and avoided it unintentionally.

"I used to be very introverted, and I felt disappointed by the whole world. I used my time reading, immersing myself in the world that books created. I had very little contact with the people nearby. Of course I had friends, but I did not think that they understood me. I used to sarcastically laugh out loud, but not smile from the bottom of my heart like now." 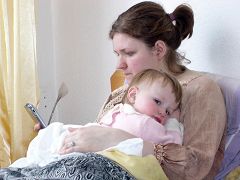 Szilvia and her daughter sharing a peaceful moment

The birth of her daughter gave Szilvia higher requirements to her college study and Falun Dafa work. "I enlightened that we should not only study the Fa, clarify the truth, and send forth righteous thoughts. Our entire life is to validate the Fa, including going to school, work, and taking care of my family. Our cultivation way is seeking inward and purifying ourselves through daily conflicts and mental conflicts between fellow practitioners. It looks like we are not different from ordinary people, but we are validating the Fa without any form... To me, every day is a new start with new requirements. If I did the three things well on one day, I would say to myself, yes, I am a Falun Dafa disciple."

Szilvia's mother still lives in Hungary, but she understands her daughter better through their frequent phone calls. They talk about husbands, children, friends, and relatives. Her mother has read through Zhuan Falun once, and is actively clarifying the truth to people. She is busy telling people abut the Nine Commentaries on the Communist Party, and the crimes of the CCP in harvesting Faun Gong practitioners' organs.

"What's my biggest change? I learned how to say "no." I used to always say "yes" to save face, and prove I was capable. Another change is how I face criticism when conflicts appear between people, which are difficult tribulations. Once a fellow practitioner said I was like a communist. I was not at peace for five days. I could not do any work, doubted if I was still a Falun Dafa practitioner, and I felt like I could not cultivate any longer. Even under that circumstance, I still have to look inside.

"Some fellow practitioners were stuck in tests and tribulations for a long time, and left Falun Dafa, but I never believed that a Falun Dafa cultivator would truly put down Dafa, just like a person walking towards godhood. How can he give that up? I often dreamed of a fellow practitioner who said he quit cultivating. I feel sad for him. I do not believe he truly wants to quit. I absolutely believe that all those fellow practitioners who left Dafa due to attachments will come back."

Szilvia clearly remembers the first time she saw Master in the United States. She sat very close to Master, and saw him clearly. She was very excited recalling the event. "My brain was blank. I just felt that since Master was there, all will be benevolently resolved, all will turn good, and all will be rectified. I knew I had found where I belong, and I will never be alone."

With May 13 approaching, Szilvia wishes to say, "Thank you, Master! Thank you for not giving up on sentient beings. You came down through layer after layer from an unimaginably high place, to save us from degeneration and destruction! Thank you for your grand mercy!"

“Danish MP Calls for Investigation into Concentration Camps in China”