April is the most beautiful season on Saipan Island. The golden red phoenix trees (Royal Poinciana) blossom in April. The blooming trees look like red flames, so it also has the name "flame tree." The annual Flame Tree Arts Festival is the biggest art festival on the island. Many art groups and organizations from the nearby islands participate. This year's festival was the biggest one. The organizer invited many art groups from different places, and the festival lasted two days more than the previous ones. 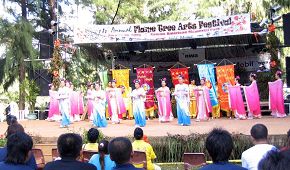 There were lots of people coming to the exhibit every day. They read the captions under every picture carefully. When they saw the pictures showing the CCP's various tortures of Falun Gong practitioners, many people were shocked. Some people sighed and asked, "Why?" After learning about the persecution, many people signed their names to condemn the persecution and wrote comments, calling for justice.

One gentleman from the Philippines visited the exhibit twice. The second time, he cried upon seeing the pictures. He did not understand why the CCP brutally persecutes the good people who believe in "Truthfulness, Compassion, Forbearance" in the 21st century. He felt very sad.

Some people, who had been deceived by the CCP's lies, didn't believe the content of the photos at the beginning. After talking to practitioners and reading the materials, they understood it. They asked for more materials and told the practitioners that they would study them carefully later. Some people also asked practitioners many questions about Falun Gong, which had confused them before. With the answers, they had a better understanding of Falun Gong.

During the festival, practitioners also had a chance to perform on the stage. They performed Tang Dynasty style dances and demonstrated the five sets of Falun Gong exercises. The beautiful music, fantastic costumes, elegant traditionally dressed ladies and the Tang Dynasty dances deeply impressed the audience. By imitating the practitioners' movements, many in the audience learned the exercises. The beauty of Dafa can melt people's hearts.