On April 14-17, 2006, tens of thousands of Australians converged in Bendigo, a famous gold mining town in Melbourne with a long history, to participate in the 136th Bendigo Easter Festival, the oldest festival in Australia.

During the four days, in order to clarify the truth about Falun Gong and expose the Chinese Communist Party (CCP) regime's brutal persecution, nearly a hundred Falun Gong practitioners in Melbourne held a series of activities. The activities included collecting signatures to oppose the persecution, holding a "Truthfulness-Compassion-Forbearance" painting exhibition, free Falun Gong exercises classes, playing the NTDTV 2006 Chinese New Year Global Gala video, and participating in the festival celebration parades in the evening of April 16 and during the daytime on April 17. Practitioners displayed Falun Dafa's wonderfulness and its popularity around the world to nearly 200,000 spectators, bringing the essence of eastern culture to Easter, this western traditional festival. 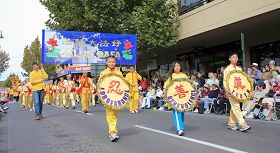 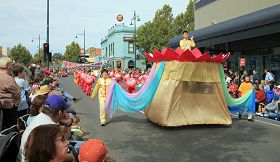 The grand Easter Parade was held on April 17, the climax of the four-day celebration. In the early morning, both sides of the main streets in Bendigo were packed with spectators. When Falun Dafa practitioners appeared, their colorful costumes, beautiful music and float, and graceful fan dance gained warm applause from the spectators.