(Clearwisdom.net) The opening of the 2006 Flower Festival in Hiroshima with the theme "Appreciation for 30 Years of Flowers and Peace" was held in Hiroshima Peace Memorial Park on May 3, 2006. The festival lasted three days. Since this was the 30th anniversary of the Flower Festival, more than 1.6 million people attended, according to the police statistics.

In the flower festival parade, most teams were from local organizations, enterprises and schools. Falun Gong practitioners were invited to the parade for four years in a row. Practitioners' parade entry featured elegant ladies in ancient costumes, a waist drum troupe, Dragon and Lion Dances and exercise demonstrations, which were welcomed by the spectators.

Compared to the parades in previous flower festivals, the exercise team was the new performance this year. Also, in the parade this year, there were some big drums in the waist drum team, which made the drum playing more vigorous. The dragon and lion dance were also more vibrant than before.

After the parade, practitioners performed the dragon and lion dances and exercises on the stage of Peace Memorial Park. Some spectators learned the exercises while watching.

During the collection of signatures, many people were shocked by the brutality of the CCP. After reading the display boards, a young man not only signed his name, but also helped practitioners to collect signatures, and he helped collect dozens of signatures. 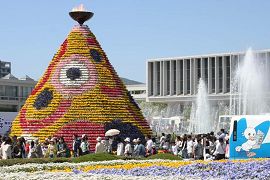 The flower tower in Hiroshima Peace Memorial Park. The torch on the top stayed ablaze for three days, until the end of the festival.

“France: Take Action to Stop the CCP from Carrying Out Its Crimes (Photos)”