On April 26, 2006, the Christian Defense Coalition and the National Clergy Council held a press conference on Red Square at Georgetown University to once again call for the Bush administration to drop charges against Wenyi Wang. 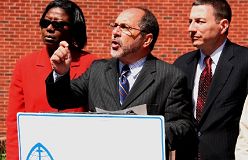 Call for Bush Administration to Drop Charges against Wenyi Wang

According to the Christian News Wire, Rev. Patrick J. Mahoney, director of the Christian Defense Coalition, commented, "We are extremely disappointed that the Bush Administration is bringing charges against Dr. Wenyi Wang that may result in her spending six months in federal prison. Her crime? Shouting out for President Bush to help stop the killing and religious persecution of Falun Gong. We believe these federal charges are sending a horrible message to the worldwide community concerning America's commitment to protecting religious freedom and liberties."

Mahoney said: "It is seems extremely hypocritical for the White House to roll out the red carpet for a world leader whose government supports the trampling and crushing of human rights. And, at the same time pursue prison time for a woman fighting to end religious persecution and violence. Our message is clear; President Bush, support religious freedom and the First Amendment, and drop all charges against Dr. Wang."

Stop the Atrocities of Organ Harvesting

Mahoney said: "Dr. Wenyi Wang stepped forward out of her conscience. As a human, as a person with religious belief, she spoke out for all the people. For the God-give freedom of every one of us, she publicly condemned the slaughter and the atrocities of organ harvesting. It is apparent that these atrocities have been exposed to the whole world. We know that these crimes existed long before, and we have now learned that they [the CCP] are committing these atrocities of organ harvesting from practitioners of this religious group in such a large scale."

Schenck said: "Even if you don't agree with their belief, everyone should step forward to stop the atrocities of organ harvesting. We know that the CCP does harvest organs, and the claims of Falun Gong are not a fabricated tale."

Mahoney said: "We understand that president Bush and other government officials need to maintain social order and adhere to normal etiquette. However, the background of this unusual appeal is such a brutal and inhuman suppression of human dignity and justice, and this fact should be taken into consideration. This is a very special factor."

Stand Together with Persecution Victims