"Where on earth are you right now?" a young woman, who was among the welcoming group for the head of the Chinese Communist Party (CCP) organized by the Chinese Embassy, called her boyfriend on her cell phone to look for him. "I'm right under [the banner reading] 'Heaven Eliminates the CCP,' beside me is [the banner reading] 'Falun Dafa is Good,' and ... all are Falun Gong people." The young man read the messages on the banners around him.

In April 2006, when Hu Jintao, the head of the CCP came to Washington, DC, Falun Gong practitioners from around the world gathered and held a grand parade and protest activities. At the same time, the CCP had also invested huge amounts of money to invite a large number of students and Chinese-Americans to welcome Hu. Falun Gong practitioners took this as a good opportunity to clarify the facts to them, because the welcoming group was there together with Falun Gong practitioners. Many practitioners seized the time to clarify the facts to those Chinese people. Many people were amazed by Falun Gong's great momentum. The scene of Heaven eliminating the CCP was right in front of their eyes. Many American people and government officials passing by were impressed by the scene, and stopped to read the banners and display boards. The media mingled in the crowd of people, busy conducting interviews.

is the best tool to disintegrate the CCP 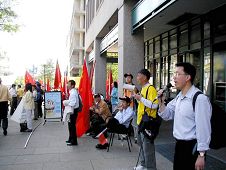 Reading the Nine Commentaries on the Communist Party

On April 19, the day when the head of the CCP arrived in Washington, DC, Falun Gong practitioners broadcast via a loudspeaker the seventh commentary of the Nine Commentaries on the Communist Party - "On the CCP's History of Killing." At the beginning, some people in the welcoming group shouted and cursed, but when it was broadcast that all previous General Secretaries of the CCP were killed by the CCP, the crowd of people immediately calmed down, and listened quietly. Many of them left the welcoming group and went to the cafe nearby to sit and listen.

At 6:00 a.m. on April 20, several big vans of welcoming people arrived in front of the White House. They displayed a "battle array" and positioned themselves at all the important intersections. At that time, the large number of Falun Gong practitioners had not yet arrived. In front of the White House, there was only a small group of practitioners who had stayed overnight there to hold a vigil. Some practitioners took up the book, the Nine Commentaries and read it loudly in the crowd. As a result, the welcoming people all lowered their heads and left with their welcoming banners.

Clarifying the facts with compassion

A German woman who was interviewed by journalist David Funkhouser from The Hartford Courant told this reporter, "A few days ago, my attachment to competition was a bit strong, and my compassion was a bit weak. But that day, at Yale University, while holding a poster depicting a practitioner who was tortured by the CCP to become only skin and bones, I told every American passing by, 'You are an American, America is a free and democratic country, please support us. At that time, I felt I was very calm and peaceful and full of compassion. I heard fellow practitioners read through a loudspeaker the CCP's history of killing from the Nine Commentaries. It happened that a group of overseas Chinese was led to another place, and their lineup was very long. Every one wore a red cap and held a red flag. I thought that the CCP is killing them. I was very sad. After that, journalist David Funkhouser came over. I didn't know he was a journalist. I still told him what I said to every American. Looking at his eyes, my tears ran down. I thought, 'You are an American, be sure not be deceived by the CCP.'"

The woman continued, "Later, a Chinese man carrying his child walked up to me. He looked at the poster, and said that it was too cruel. I told him about the CCP's genocidal persecution of Falun Gong practitioners, that they even remove Falun Gong practitioners' organs when they are still alive. That man said that it was committing a crime. I told him that the red flag the child held is dyed by the blood of tens of thousands of compatriots, be sure not to let the child hold it any more. He agreed and left. Later, I saw him again, and I noticed there was no red flag in the child's hand."

Welcoming group is not welcome

A Swiss Falun Gong practitioner described the situation of how a police office who had learned about the truth supported Falun Dafa. When the CCP's supporters tried to block Falun Gong practitioners' banners with their flags, the officer walked up to them and ordered them not to do so. When he turned around, those people blocked the practitioners' banners again. That police officer saw it and ordered them to stand further back, away from practitioners. After this went on several times like this, those people carried more red flags to try to block the Falun Gong banners. This time, the officer simply drove them to the back, and did not allow them to come to the front any more. Some people in the welcoming group scattered at the back in twos or threes, but they dared not to come to the front any more. Later, there came a group of Tibetan people. They walked to where the Falun Gong practitioners stood while shouting, "Heaven Eliminates the CCP," "Falun Dafa is Great," "No More CCP."

“On the Wenyi Wang Appeal Incident”