On April 25, 2006, practitioners gathered at the Chinese Consulate in The Hague to commemorate the 7th anniversary of the "April 25 Appeal". They protested against the CCP's atrocities of large-scale organ removal from Falun Gong practitioners detained in labor camps. An urgent appeal was made to the international community for an immediate investigation so that the atrocities can be stopped. The rally also voiced support for the ten million Chinese people who had withdrew from the Chinese Communist Party. 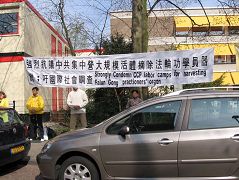 All of the people who came to the Chinese Consulate for consular services saw practitioners' banner. Many of them accepted leaflets about the persecution and copies of the Nine Commentaries on the Communist Party. After learning about the Chinese regime's abhorrent atrocities of harvesting organs from live Falun Gong practitioners detained in labor camps, a lot of people condemned the crimes and expressed their indignation.