Hosted by the Falun Gong Club, the "Journey of Fa-Rectification" photo exhibit is being held at the lobby of the Manhattan New School for two weeks. The "New School," with about 8,000 registered students, is an adult college located close to Union Square. 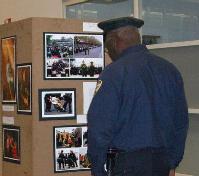 A police officer comes to view the photo exhibit

Ben, a student of the New School, is the director of the Falun Gong Club. He said that the club was founded last year with the mission to introduce Falun Gong, clarify the truth, and raise awareness of the persecution in China to students and faculty members. When he first came to the school, not many people there knew about Falun Gong. One year later, the majority now knows about Falun Gong, and many have signed his petition to show their support. The exhibit was sponsored by the school.

As the exhibit site is located at the school entrance, no one will miss it. The exhibit consists of three sections: "Falun Dafa Is Good!" "The Brutal Persecution of Falun Gong in China" and "Overseas Practitioners' Activities to Resist the Persecution." Every photo has an introductory description.

People now and then stop to view the exhibition.

The exhibit will run through April 7. In the evening on April 7, the Falun Gong Club will hold a candlelight vigil to commemorate the practitioners killed by the CCP in the Sujiatun Concentration Camp and to call on New Yorkers to condemn the CCP's atrocities.

“Empress Ma Mingde, the First Lady of the Country”