On the evening of April 25, 2006, Falun Gong practitioners and some supporters held a rally and candlelight vigil in front of the Chinese Consulate to review the peaceful protests during last seven years, condemn Chinese Communist Party (CCP)'s inhuman persecution and commemorate thousands of fellow practitioners who have lost their lives in the persecution. 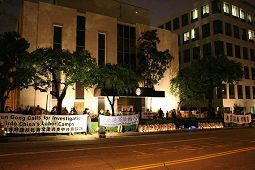 Candlelight vigil to commemorate fellow practitioners who have lost their lives 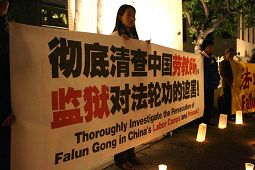 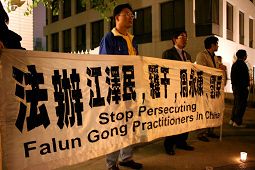 The 4.25 Appeal and seven years peaceful protest, practitioners safeguard their belief in Truth, Compassion, Tolerance with their lives 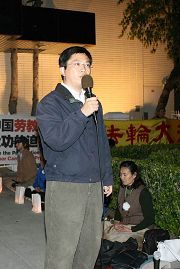 Practitioner Wu Yingnian, Associate Professor of University of California at Los Angeles (UCLA) reviewed the 4.25 appeal. On April 25, 1999, ten thousand Falun Gong practitioners appealed to the National Appeals Office based on rights granted by the Constitution of China and requested the release of the practitioners unlawfully arrested in Tianjin. They also requested a free cultivation environment and legal publication of Falun Dafa books.

The then Prime Minister Zhu Rongji met and talked to practitioner's representatives. The practitioners lined up in good order from beginning to end. After a satisfactory answer was obtained, the practitioners left at 11:30 p.m. after cleaning up the environment. The peaceful appeal due to the violent arrests was rationally resolved. This was the well known 4.25 appeal incident.

But less than three months later, on July 20, 1999, the CCP regime broke its promise of "freedom to practice" and initiated the inhuman brutal persecution against Falun Gong practitioners.

Dr. Wu pointed out that during the last seven years' peaceful protest, Falun Gong practitioners have remained steadfast in their belief and have not succumbed to the CCP's violent tyranny.

Qu Zheng of "Coalition to Investigate the Persecution of Falun Gong in China (CIPFG)" read the urgent declaration of the coalition, "Since 2001, concentration camps similar to the one in Sujiatun have been set up in multiple provinces to detain large numbers of Falun Gong practitioners. In those camps, the authorities perform organ harvesting from live practitioners for sale and then cremate the remains to destroy the evidence. The atrocities were exposed to the international community in the beginning of March. Within three weeks, the underground concentration camp in Sujiatun was quickly relocated. Meanwhile, some hospitals and transplant centers in China are rushing to perform a large number of transplant operations: A slaughter to destroy witnesses/victims of the concentration camps is happening, and we urgently call upon the international community to initiate rescue programs to stop this new genocide."

Editor-in-chief Wu Fan of China Affairs said, "From the 4.25 peaceful appeal to ten million withdrawals from CCP and related organizations, the CCP's demise is continuing. Eliminating the CCP is the fundamental choice of China."

Dr. Yingnian Wu rebutted the CCP's slander. He said that the CCP cannot represent China. China has a 5000-year civilized history, but the CCP is only just over 80 years old. The CCP has committed many wrongdoings and damaged China. Under the CCP's tyranny, 80 million Chinese people were killed and Chinese traditional culture was destroyed. The CCP is highly corrupt. It even removes body organs from living Falun Gong practitioners to make a profit. The CCP is the real force against humanity and China.

“As the CCP Harvests Organs from Living People, An Angry Public Withdraws from the Party”