St. Louis: Practitioners Call for an End to the Persecution on the Seventh Anniversary of the April 25 Appeal (Photos) 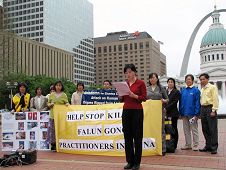 At the press conference, the practitioners read statements commemorating 4.25 and called for an end to the persecution. They also read the most recent investigation report on the CCP's organ harvesting from live Falun Gong practitioners. The report was from the World Organization to Investigate the Persecution of Falun Gong (WOIPFG). 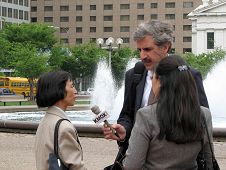 Ms. Guihua Li was unlawfully imprisoned in a labor camp in China for 8 months for clarifying the truth to the public. She exposed the CCP's brutal persecution of Falun Gong practitioners with her own experience. She said, "Sanshui Women's Labor Camp in Guangsong Province conducted a whole body physical examination of all Falun Gong practitioners when I was imprisoned there. But other inmates were not examined. It was a puzzle because the labor camp did not treat practitioners as human beings. Recently, the CCP's crimes of live organ removal were revealed. It reminded me of the labor camp's attempt to conduct physical examinations."

Ms. Li said, "when I was in the labor camp, some practitioners were taken away. We did not know where they were taken to. Ms. Liu Peizhen, my friend, was arrested last April in Shenzhen. Her family members were not allowed to visit. After learning of the CCP's crime of live organ removal, I worry about the plight of fellow practitioners imprisoned in China. I call on all kind-hearted people to pay attention to the issue and help end the persecution of Falun Gong."

Reporters from the local TV station KMOX interviewed the practitioners and broadcast the news of the CCP's live organ removal in its news program on the next day. The reporter mentioned in the program that some people might not believe such a crime because it's too cruel, and explained that people did not believe it when Nazi's death camps were initially revealed in 1940s either.