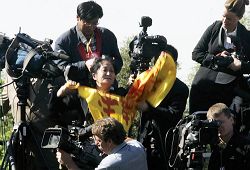 Wenyi Wang on the south lawn of the White House

(Clearwisdom.net) During President Bush's welcoming ceremony for the visiting Chinese Communist Chairman, according to media, various issues arose one after another, and the largest one turned all the cameras from Hu Jintao to a Chinese woman.

After President Bush finished his welcoming remarks and Hu began his speech, Ms. Wenyi Wang suddenly started to shout messages and unfurled a yellow banner next to a camcorder which was shooting the ceremony for a live broadcast. Ms. Wang had entered the site as a reporter. She shouted in both Chinese and English, "Falun Dafa is Good! and "Stop the Persecution of Falun Gong" as well as some other personalized words of protest. The whole site was shocked.

Ms. Wang, a naturalized Chinese American, received her first medical degree from Bethune University of Medicine in Jilin province, China. She came to the United States sixteen years ago and obtained a PhD in Neurology from the University of Chicago, and then practiced at the Mount Sinai Hospital in New York. While working as a practicing physician, Wang also did volunteer work as a reporter for two media outlets founded by Falun Gong practitioners.

Similar protests on such occasions have been rarely seen in the past, but typically, an unusual act has an unusual reason behind it. In fact, this is also true in this case. In the past month, Ms Wang has witnessed an unusual case developing: the exposure of an unprecedented genocide.

In March, three witnesses in succession exposed that the Chinese Communist regime set up concentration camps to harvest organs from living Falun Gong practitioners and then cremate their bodies to destroy evidence. They have been doing this since 2001. As a reporter and physician, Ms. Wang has been in contact with two of the three witnesses, who are now living in the U.S. She also accompanied the two to accept media interviews and to testify before the U.S. Congress.

In his testimony, a witness named Peter said: "From 2003 to the beginning of 2006, I have used large amounts of man power, material supplies, and financial resources, and finally found this facility in Sujiatun, where many Falun Dafa practitioners were detained, and their cornea, organs, and bone marrow harvested live, and then their bodies cremated. Even their hair is made into wigs, and their skin and body fat is sold. The remainder of their bodies are then cremated to destroy all evidence. Ladies and gentlemen, can you believe that such crimes are still underway in other regions in China?"

In response to the organ harvesting claim, the Chinese Communist regime spent three weeks disposing of eye witnesses and evidence of the Sujiatun underground concentration camp. It then publicly denied the existence of the camp and invited international community to investigate the site. However, regarding the question: "Why did it take three weeks for the regime to respond, and what was the regime doing during these three weeks? --the regime again pretends to not hear.

Meanwhile, sources revealed that Luo Gan, a key member of the Jiang group, has secretly ordered to dispose of (kill after organ removal) all Falun Gong practitioners who are being detained as organ suppliers. Luo also ordered the execution of some criminals from May to July. It is believed that the organs of these executed criminals will be purposefully introduced into the organ market in China in order to complicate the investigation on organ harvesting from living Falun Gong practitioners.

World Organization to Investigation the Persecution of Falun Gong (WOIPFG) has confirmed that many civil and most military and armed police hospitals and organ transplant centers are suspected to have been involved in harvesting organs from Falun Gong practitioners for transplant.

After the Sujiatun concentration camp was exposed on March 9, some hospitals in northeast China which were exposed to limited international investigation received orders to suspend their transplant business. However, after the Ministry of Health published "Interim Organ Transplant Regulation" on March 27, all hospitals and organ transplant centers not only resumed transplant operations but also dramatically increased the number of operations. A large number of hospitals told undercover reporters that they had sufficient organ supplies in April and May but the supply will become lean afterwards. Such claims came from hospitals in many provinces and autonomous regions. This suggests that the Chinese Communist regime is massacring Falun Gong practitioners who are being used as living organ suppliers.

To thoroughly investigate the persecution and stop the massacre, overseas Falun Gong practitioners have established the "Coalition to Investigate the Persecution of Falun Gong in China" and have demanded the Chinese Communist regime to open all labor camps, prisons, detention centers, hospitals and all other related facilities for international investigation.

However, On April 19, Linda Xu, Sound of Hope senior reporter who is in charge of Mainland China news, and Lei Xu, chief editor of European Epoch Times, responded to an open invitation from Qing Gao, spokesman of the Chinese Ministry of Foreign Affairs. They went to the Chinese Consulate in Sydney and the Chinese Embassy in Berlin respectively to apply for visas in order to go to China to investigate the organ harvesting claim. Their visa applications were rejected.

Ms Zhou said: "The CCP's action of not allowing us to go to China to investigate tells us that the persecution of Falun Gong does exist."

When the Chinese Communist regime invited the international community to visit the Sujiatun hospital (the concentration camp), it didn't want to invite the people who really want to disclose the truth to investigate. This invitation was just a trick to deceive the world. Looking back on the cases in which the regime invited international media to labor camps, every detail, including who was invited, what facilities were inspected and the time of inspection was always arranged by the Chinese Communist regime itself. Of course, people didn't see any evidence of persecution. They only saw joyful deer running on a lawn at the Tuanhe Labor Camp in Beijing. How could a murderer take the initiative to show inspectors his murder weapon. Sixty years ago, the Nazis also invited foreigners to visit a concentration camp, where people saw Jews playing in a "free environment".

When interviewed by Sound of Hope Radio, Wenyi Wang said that the organ harvesting practice of the CCP is comparable to the holocaust. If the atrocities are not publicized, they will continue.

Dr. Wang's opinion has sufficient supporting evidence. Regarding her method of protest, most practitioners believe that public protests to "Stop the persecution of Falun Gong", "Bring Jiang, Luo, Liu and Zhou to Justice" and calls for attention to the atrocities of harvesting organs from practitioners are necessary, urgent and serious. However, as practitioners, emotion should be avoided, though such a requirement can be hard to attain under certain circumstances, given the pressing urgency of the persecution. As a reporter, there are perhaps better ways to raise media attention than unfurling banners and shouting messages. However, those require more time, rationality, and wisdom. As for timing, considering their current response speed and understanding of the situation, it would be impossible for western media to rescue those Falun Gong practitioners detained as living organ suppliers.

The Chinese Communist regime is still denying the facts and covering up the abhorrent consequences of its "not being responsible" persecution policy. In addition, such consequences are spreading every day. If the international community doesn't pay close attention to this in time, history will repeat itself and the solemn "Never Again" vow will become an empty promise.

What prompted Ms. Wang's unusual action on this occasion was the increased evidence of persecution. The exposed crimes of the persecution are abhorrent, evil and inhumane and cannot be tolerated any longer. Actions must be taken now to rescue those practitioners detained as organ suppliers.

We hope that the urgent and severe situation that prompted Ms Wang's unusual protest will truly catch the attention of the U.S. government and all circles. It is time to thoroughly investigate the persecution, and we should let the world know about the tragic cases of persecuted practitioners during the past 7 years through extensive media coverage.