(Clearwisdom.net) The Central News Agency reported on April 17, 2006 that it is said that the Chinese Communist Party would kill a large number of Falun Gong practitioners prior to May 1, 2006. Falun Gong practitioners from the Asia-Pacific region held a candlelight vigil tonight in Xizi Wan, in Kaohsiung City. Besides commemorating Chinese practitioners who have had their organs harvested when they were still alive, the vigil was also urgently called upon people from all walks of life to rescue the remaining innocent practitioners detained in prisons in China. 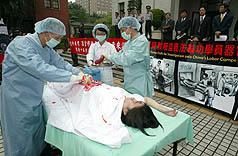 Professor Liu Shaodong from Kaohsiung Medical University expressed that organ donations are originally a noble act, so in autopsy classes at the medical university, teachers and students respectfully call the bodies for autopsy and research, "Body Teachers." It is hard to imagine that the innocent people in China have their organs removed while they are still alive and their organs are sold for huge profits.

Chen Ying-Can pointed out in deep grief that he often heard about Taiwanese people going to China for organ transplants. Today, he learned about this horrible fact. He expressed that everyone must stand up for what is right.

“Central News Agency: Hu Followed Closely by Protesting Groups Wherever He Goes During His Visit to the U.S.”